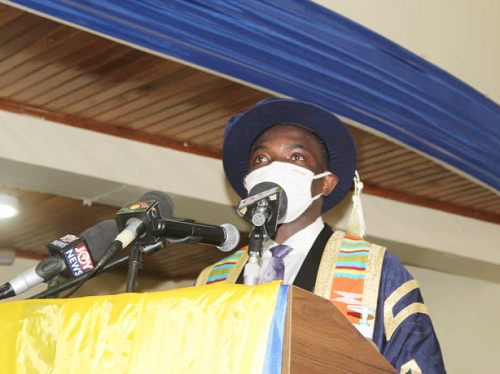 The Vice-Chancellor of the Pentecost University, Rev. Prof. Kwabena Agyapong-Kodua has called on government to extend its support to private tertiary institutions.

His call was upon a reflection that graduates from both public funded and private universities constitute the hearts and hands of the economy. So therefore, any support to adequately prepare them should be given to both categories of institutions. "By doing so, we’ll be equipping the younger generation to become problem-solvers in our nation,” he said.

Rev. Prof. Agyapong-Kodua made the remarks in an interview with Daily Graphic on the sidelines of the 12th congregation of Pentecost University in Accra last Saturday.

Reacting to the call to support students in the payment of their fees following the coronavirus pandemic, and even extending that support to private students, Rev. Prof. Agyapong-Kodua said it was “a great call” because such supports were germane to the educational pursuit of the students in difficult moments.

“The truth of the matter is that, if you sit back and reflect on it, these young graduates are going to be the hands and the hearts of the economy and every support that we’re giving to state or government-funded institutions is from the taxpayers’ money. Therefore, it should also be passed onto these ones who are also in private institutions and through that, we’ll be equipping them to become problem solvers in our nation,” he advanced.

His remarks contradicts the position of the Minister designate for Education, Dr Yaw Osei Adutwum, to the effect that majority of universities were okay with government not absorbing the fees as proposed by the Minority in Parliament when he (Dr Adutwum) rose to argue against the motion on the floor of the House last week.

The university graduated a total of 688 students comprising 424 undergraduates, 120 postgraduates and 144 certificate holders.

In all, 20 students were awarded for distinguishing themselves in various fields of study.

In his address to the graduands, Rev. Prof. Agyapong-Kodua charged them to go and make a difference by being morally and intellectually sound problem solvers.

"This is what the world will test you on. Please prove us right by distinguishing yourselves out there. Seated here are potential inventors, ministers of the Gospel, politicians, medics and pilots.

"I have confidence in your future. But the evidence of your graduation from Pentecost University must be demonstrated in your ability to showcase esteemed integrity, excellence and resilience," he added.

Rev. Prof. Agyapong-Kodua stressed that the institution had distinguished itself to become "the A+ university" and had bridged the gap between its academic works and industry.

"For all the skills they have acquired in this university, I expect them to be great employers; Ghana is blessed to have these ones and the world is really blessed," he intimated.

For his part, the Chairman of the University Council, Rev. Prof. William Otoo Ellis, implored the graduands to be "worthy ambassadors to reflect this university."

He later used the opportunity to warn the public against the gravity of the COVID-19 pandemic, cautioning that "be careful and respect all the COVID protocols."