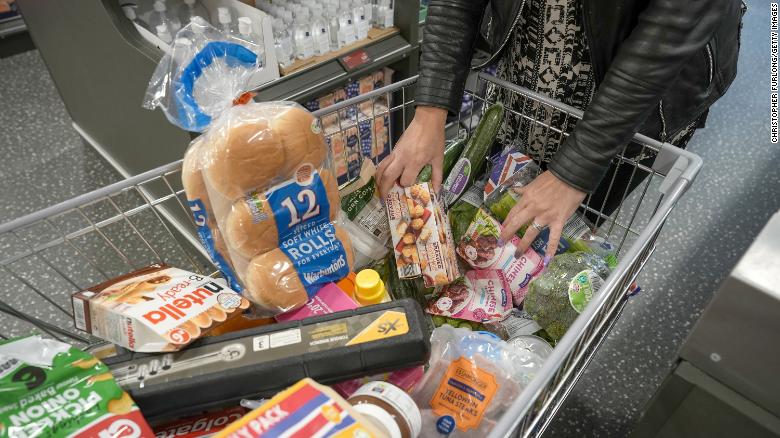 Inflation in the United Kingdom hit a new 40-year high last month, rising above 10% for the first time since 1982 and piling further pain on households already struggling to pay their bills.

Annual consumer price inflation hit 10.1% in July, according to data published by the Office for National Statistics on Wednesday, up from 9.4% in June. Soaring food prices — up 12.7% since July 2021 — were the largest single contributor to the acceleration in inflation, the ONS said.
The headline inflation number was higher than predicted by a Reuters poll of economists, and food inflation is now running at its highest level in 14 years.
"All the eleven food and non-alcoholic beverage classes made upward contributions to the change in the annual inflation rate, where prices overall rose this year but fell a year ago," the ONS said.
The largest upward contributions came from bread and cereals, and from milk, cheese and eggs, with notable price increases in cheddar cheese and yoghurts.
On a monthly basis, the consumer price index was up 0.6% in July, compared with no change a year ago. Higher gasoline and diesel prices, together with rising air fares, were also to blame, the ONS added.
The higher-than-expected reading will keep the pressure on the Bank of England to follow last month's biggest increase in interest rates in 27 years with further rate hikes despite mounting evidence of the pressure on household budgets and signs that the UK economy may already have entered a recession.

Data published last week showed that the country's GDP dropped by 0.1% in the second quarter of this year.

'Miserable' for consumers
And Tuesday's official labor market report found that paychecks rose by 4.7% between April and June, meaning average incomes fell by 3% during the period once inflation is taken into account — the biggest drop in real wages since the ONS began keeping records more than 20 years ago.
"The situation is miserable for UK consumers, who are currently being squeezed from all sides," wrote Kallum Pickering, senior economist at Berenberg, in a note to clients. "Wages are not rising fast enough to offset surging inflation, but they are rising too fast for the [Bank of England's] liking, as it wants to return inflation to target," he added.
Inflation is forecast to go even higher later this year, driven by further rises in regulated energy bills in October. Electricity prices have already risen by 54% and gas prices by 95.7% in the 12 months to July 2022 because of rocketing wholesale costs, worsened by Russia's invasion of Ukraine in late February.
UK government officials are reportedly examining options to provide more support to households. But Liz Truss, frontrunner to succeed Boris Johnson as next UK prime minister in early September, has yet to set out a detailed plan beyond promising tax cuts.
The opposition Labour Party is calling for a windfall tax on UK oil and gas companies to be extended to help fund a freeze in household heating bills this winter.