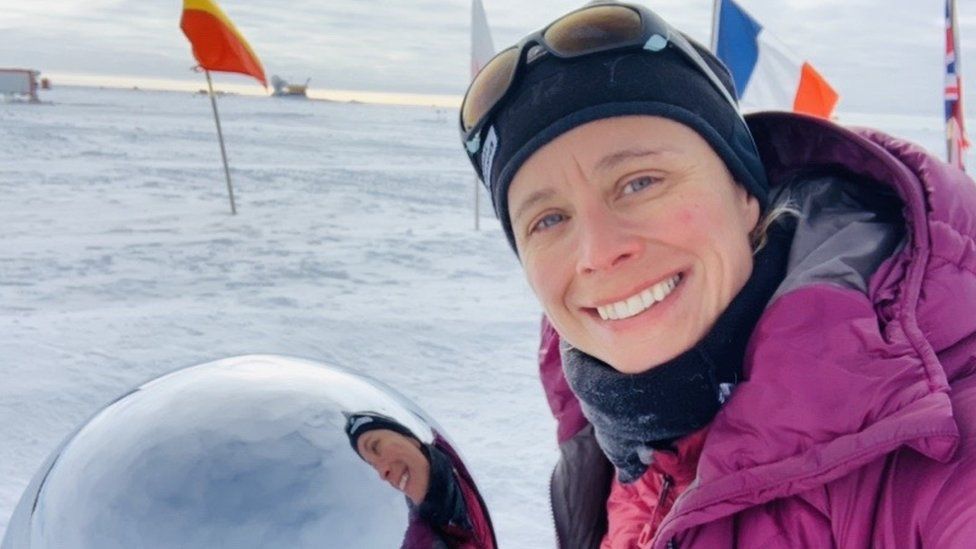 A mother-of-four is aiming to become the fastest woman to ski solo from the Antarctic coast to the South Pole.

"I want to try and go a little bit faster and really put out there that I'm aiming for the record," she said.

"It's going to be a massive challenge, that's for sure."

She discovered polar trekking about eight years ago and told BBC Radio Wales Breakfast that it had been "life-changing".

"It's become my life, my work," she said. "I work as a polar guide and expeditions manager."
She completed the challenge in 42 days three years ago, travelling on her own, with no outside support or kit resupplies.

Going for the record is "ambitious, but I think it's definitely achievable," she said.

To beat the record, she needs to complete the challenge in 38 days and 23 hours, which will mean travelling at least 7% faster than last time. But her ambitions stretch further: she wants to take a "good chunk" off that time
Training for the extreme endurance challenge in one of the world's harshest environments has included trips to Iceland.

"I do some very specific training on snow and ice pulling my sled," she said.

At home, she replicates that challenge by dragging tyres out in the Welsh countryside. She also hikes with weights in the Brecon Beacons and spends a lot of time at her local gym.

"I'm going to be 45 in just a few days time... I want to inspire women and girls to go out and do those big adventures," she said.

She is also raising money and awareness for Women in Sport and the Youth Adventure Trust.

Although she will miss Christmas - the travelling conditions in Antarctica, with 24-hour daylight and bearable weather, are best from November to January - her children are fully behind her.

"I think secretly (they are) a little bit proud of having a mum that does this kind of crazy stuff."