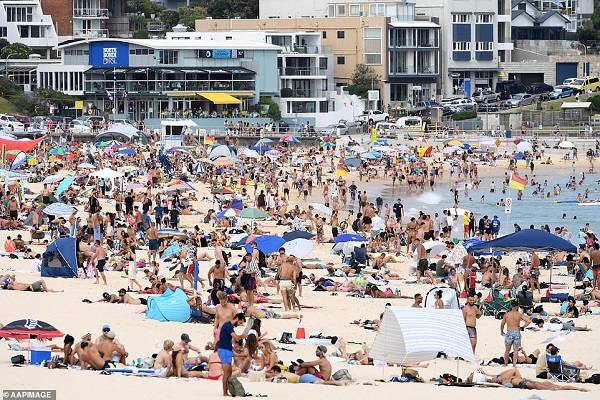 The popular Bondi Beach was teeming with revellers as temperatures in parts of Sydney soared to 40C. Credit: dailymail.co.uk
30.5k Shares

Thousands of Australians packed the beaches on Tuesday to celebrate their national day as the revellers made the most of the country's few Covid cases.

Many flocked to popular hotspots such as Bondi Beach and the Gold Coast where they partied with little social distancing in sight to mark Australia Day.

But many others protested the public holiday, taking to the streets to rally across the country against the day's colonial associations.

The January 26 holiday marks the date the British fleet sailed into Sydney Harbour in 1788 to start a penal colony, viewing the land as unoccupied despite encountering settlements.

But for many Indigenous Australians, who trace their lineage on the continent back 50,000 years, they view it as 'Invasion Day'.

Five people were arrested on Tuesday in mostly peaceful protests where demonstrators chanted 'Black Lives Matter' and 'always was, always will be Aboriginal land'.

For others, the day was a cause for celebration and many donned their swimwear and partied in soaring temperatures on the beaches.

Masks and social distancing were a rare sight with Australians enjoying their lack of local virus transmissions.

Australia has fared better than most other developed economies in the pandemic, with just under 28,800 total cases and 909 deaths, mostly in Victoria state.

On Tuesday, the country recorded its ninth consecutive day of zero community transmissions, according to the health ministry.

Around 2,000-3,000 people gathered in Sydney for the protests on Tuesday, according to estimates by the New South Wales police.

People gathered at a central Sydney park in defiance of police threats of fines and arrests for breaching a 500-person limit on public gatherings, though organisers called off a march through the city that usually follows.

The handful of arrests were made for breach public conduct rules and scuffling with the police, but the police said most protesters were 'well-behaved'.

In Melbourne, television footage showed several thousand people marching through the city centre, many wearing T-shirts with the Aboriginal flag, while organisers tried to ensure social distancing rules were observed.

An estimated 10,000 turned out to march through the streets and attendees walked in 100-person groups to comply with coronavirus rules.

Some waved Aboriginal flags, while others held aloft signs including 'No Pride in Genocide' and 'You are on Stolen Land'.