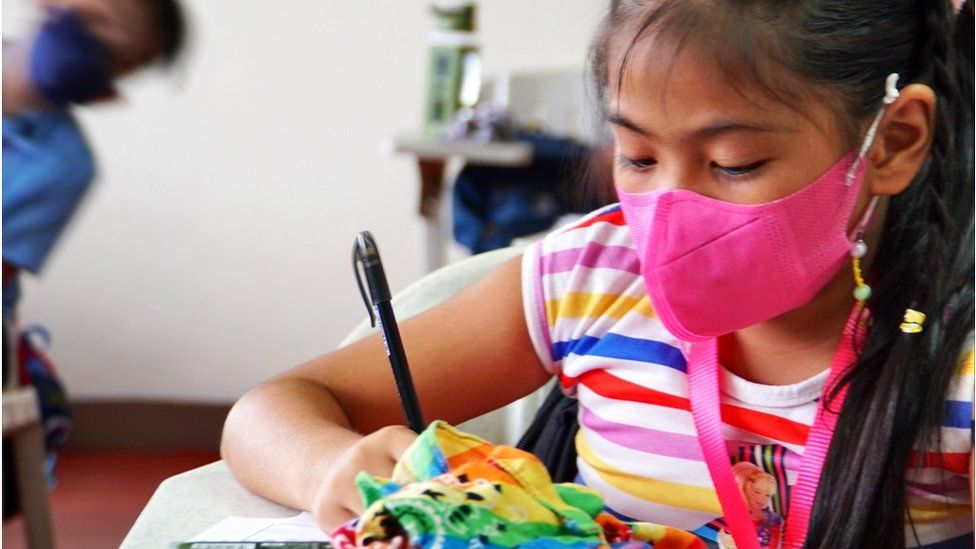 Jhonas Doaiyne is in his third year at school in the Philippines - and yet he's never been in a classroom. Until today.

He's never been able to raise his hand and ask his teacher a question. Or sit next to his friend. Or wear his school uniform.

The eight-year-old has only ever been connected to his school through a laptop or phone screen.

He - and some 27 million other students across the country - had to study online for two years as the government in the Philippines imposed one of the longest lockdowns in the world to prevent the spread of Covid-19.

And now, for Jhonas, finally being in class means learning new rules.

"My mummy told me that if I did some chit -chat with my school mate I would be in bad trouble," he says.
But there was little chit-chat in the classes - even in the biggest ones - at the Palanan Elementary School in Makati, a district of Manila. The students were focussed fully on their teacher, many diligently copying their school schedule into their workbooks.

These scenes were being repeated in nearly half of all schools in the Philippines. Local TV stations were filled with information on the best bus routes to get children to school safely and glorious pictures of excited young children skipping through gates in brand new uniforms.

Some had even dressed up for the day in headbands that read "excited to learn". The handmade banners outside many of the schools read "welcome back, we have missed you".

Around 46 percent of students started five days of face-to-face classes on Monday - and the rest will partly stay online for now. The government hopes that all children registered to go to school will be back in classrooms by November.

But international agencies are concerned about the effects of more than two years of online learning. A recent World Bank report claims nine out of 10 Filipino children still struggle to read simple texts by the age of 10.

"Fighting this learning crisis is the challenge of our times if we do not want to lose this generation of children and youth," the report says.

Here at the school, Principal Sanchez is aware her students have fallen behind.

"We were able to assess their performance and based on those assessments we found that most of our children are missing some of the competencies expected of them," she said while outlining a special eight-week programme designed to fill at least part of the gap.

"It's overwhelming. It's a lot," said Carla, who teaches third grade.
"The transition really is the hardest. They don't know what to expect in a classroom. Online classes were just two to three hours of online studying. But today, it's already six hours of full-time face to face classes."

She explained that most of the children's parents worked full-time and that home supervision during online learning had been rare.

One grade three pupil admitted that she had trouble accessing the internet and kept missing classes. And this is in a well-connected area of the capital city. More than half of the country's population, around 58 million people, live in rural areas.
Augusto from the sixth grade can't stop practising his English and asking questions about where I am from.

"My favourite part is recess. For me - I'm in love with food," a girl in the third grade says before quickly reassuring the teacher that she loves classes too.

But of course, for many of them, being back at school means finally being able to meet other children.

The students stand up and introduce themselves and it has become a game to memorise all the new faces and names.

"When you get to come to classes you get to meet your new friends," says one second grader.

The rest of the class nod and clap in agreement.