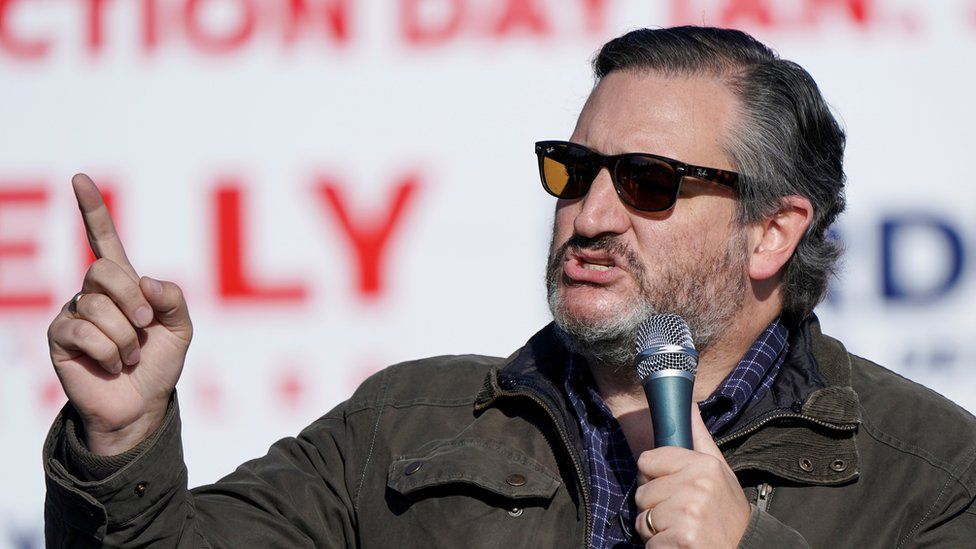 A group of US senators say they will refuse to certify Joe Biden's election victory unless a commission is set up to investigate alleged voter fraud.

The 11 senators and senators-elect, led by Ted Cruz, want a 10-day delay to audit the unsubstantiated allegations.

The move is not expected to succeed as most senators are expected to endorse Mr Biden in the 6 January vote.

His legal efforts to overturn results have been overwhelmingly rejected by the courts. He has only one minor win, concerning a small number of postal ballots in Pennsylvania, one of the states Mr Biden won in last year's race.

Congress is due on that day to certify last month's verdict by the US Electoral College - a body that awards points for each state won by presidential candidates in November's election.

The college concluded that Mr Biden won the race by 306-232, but this must be affirmed by Congress in what is normally a straightforward procedure.

Inauguration Day, when the new Democratic president and vice-president are sworn in, will be on 20 January.

What do Trump allies want?
In a statement, the 11 senators led by Texas senator Ted Cruz said November's election had "featured unprecedented allegations of voter fraud, violations and lax enforcement of election law, and other voting irregularities".

Citing a precedent from 1877 - when a bi-partisan committee was formed to investigate after both parties claimed victory in three states - they urged Congress to appoint a commission for an "emergency 10-day audit of election returns in the disputed states".

"Once completed, individual states would evaluate the commission's findings and could convene a special legislative session to certify a change in their vote, if needed," they said.

However they said their bid was unlikely to succeed. "We are not naïve. We fully expect most if not all Democrats, and perhaps more than a few Republicans, to vote otherwise," they said.

Their move is separate from that of Missouri Senator Josh Hawley, who has also said he will reject the Electoral College result over election integrity concerns.

A group of Republicans in the lower chamber of Congress, the House of Representatives, is also planning to contest the election results.

What will happen on 6 January?
Electoral count objections that are endorsed by a member of the House of Representatives and a member of the Senate must be considered by lawmakers in a two-hour debate, followed by a vote.

But for electoral votes to be rejected, a majority in both chambers must uphold the objection. This scenario is seen as all but impossible since Democrats hold a majority in the House and some Republicans in the Senate have already said they will not contest the results.

Top Republicans have said the Senate's role in certifying the election is largely ceremonial and should not be an opportunity for further lengthy debate about the result.

Senate majority leader Mitch McConnell has already recognised Mr Biden's victory and has asked other Republicans not to object.

Utah Senator Mitt Romney, the only Republican to vote for Trump's impeachment last year, has also expressed dismay at moves to overturn the election.

"I could never have imagined seeing these things in the greatest democracy in the world. Has ambition so eclipsed principle?" he said in a statement.

The Biden camp has not responded to the latest move to object to the election result. But Biden spokeswoman Jen Psaki has described Mr Hawley's attempt as "antics".

"The American people spoke resoundingly in this election and 81 million people have voted for Joe Biden and Kamala Harris," she said.

"Congress will certify the results of the election as they do every four years."