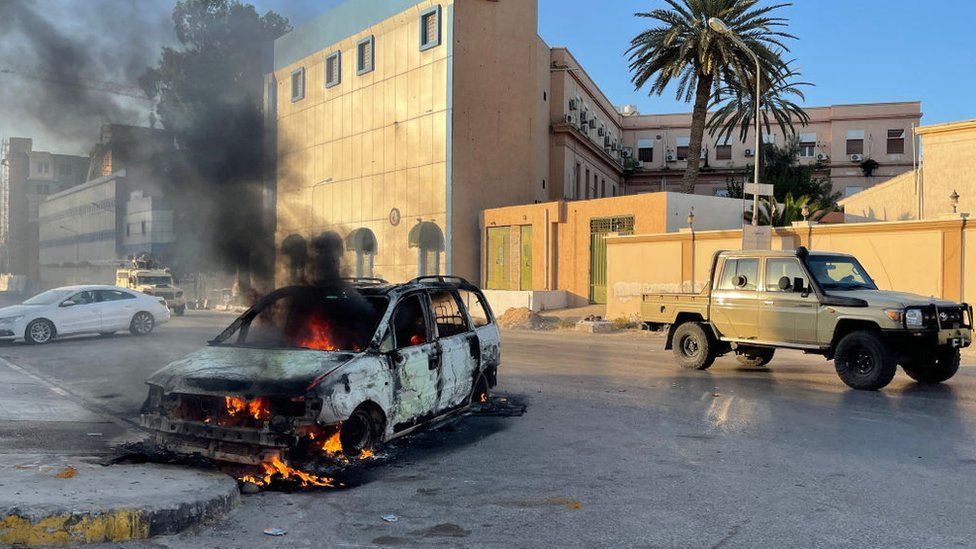 A damaged vehicle in Tripoli on Saturday
30.5k Shares

The UN has called for an immediate stop to hostilities in Libya following a day of deadly clashes between political factions in the capital Tripoli.

At least 23 people were killed and dozens more were wounded during the fighting, the health ministry in Tripoli said.

Among the dead was young comedian Mustafa Baraka, an official said.

Libya has been in chaos since the Nato-backed uprising in 2011 that ousted long-serving ruler Col Muammar Gaddafi.

Despite this, the country had enjoyed a relatively calm period over the last two years.

On Saturday, armed forces of the internationally recognised government tried to push back a convoy of militia loyal to Fathi Bashagha, the man whom a rival, eastern parliament recognises as prime minister.

There were reports of small-arms fire and explosions in several areas of the capital. Black smoke could be seen rising across the city.

Emergency services said a number of hospitals had been hit. People were also evacuated from areas around the fighting.

The UN's Libya mission said the fighting had included "indiscriminate medium and heavy shelling in civilian-populated neighbourhoods" and called for an immediate ceasefire.

The oil-rich country once had one of the highest standards of living in Africa, with free healthcare and free education.

But the stability that led to its prosperity has been shattered and Tripoli has seen frequent fighting between rival forces since 2011.

#Libya : Health official says that Mustafa Baraka - a young comedian known for social media videos - has been killed during the clashes between rival factions that broke out earlier today in #Tripoli #ليبيا pic.twitter.com/UXljGDEIRI