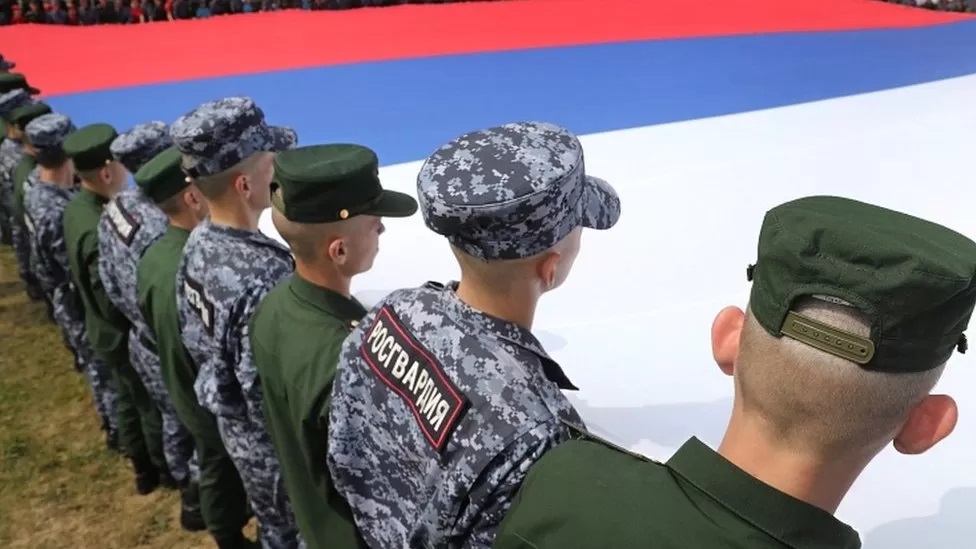 Russia's plan to expand its armed forces is unlikely to have an impact on the Ukraine war, the UK's Ministry of Defence has said.

Vladimir Putin recently signed a decree to increase the Russian armed forces' military personnel to more than 1.15m - a potential increase of 137,000.

But the MoD said the boost was unlikely to increase Russia's combat power - partly because of ongoing losses.

There have been reports that recruiters have even been visiting prisons, promising inmates freedom and money.

Currently, Russia has a limit of just over a million military personnel, plus almost 900,000 civilian staff.

In one of its regular updates on the war, the UK ministry said it was not clear if the planned increase would be achieved by recruiting more volunteers - or by increasing conscription.

But any increase was unlikely to have an impact in Ukraine given that:

Russia has lost tens of thousands of troops,
Very few new contract (i.e. non-conscript) servicemen are being recruited
Conscripts are not technically obliged to serve outside Russian territory, the MoD said.
Western officials say some 70-80,000 troops have been killed or wounded since Russia invaded Ukraine six months ago.

Russia planned a short, decisive campaign when it invaded Ukraine in February, but Ukrainian resistance has stalled its progress, and in recent weeks front lines have hardly moved.

Currently, Russian men aged 18 to 27 are subject to conscription, although many are able to avoid or reduce their service - usually one year - through medical exemptions or by enrolling in higher education.

Meanwhile, Ukraine has accused Russian troops of shelling the grounds of the Zaporizhzhia nuclear power plant again over the past 24 hours. But Moscow in turn says Ukrainian forces have been shelling the plant.

The head of the plant's Ukrainian operator, Petro Kotin of Enerhoatom, has warned that radiation could be released locally if missiles hit the spent fuel stored beside the reactors.

"As a result of periodic shelling, the infrastructure of the station has been damaged, there are risks of hydrogen leakage and sputtering of radioactive substances, and the fire hazard is high," Enerhoatom said on Telegram.

The ministry also said the Russian air force had shot down a MiG-29 aircraft in the eastern Donetsk region, and destroyed six missile and artillery weapons depots in the Donetsk, Mykolaiv and Kherson regions, Reuters news agency reports.

The BBC is unable to independently verify the claims on either side.