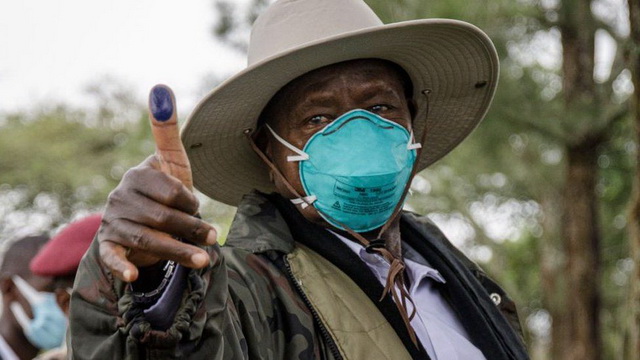 The country's electoral commission has dismissed allegations of vote rigging, made by opposition candidate Bobi Wine, a former pop star.

But election monitors say confidence in the count has been damaged by a three-day internet outage.

Final results are expected to be confirmed on Saturday.

Dozens of people were killed during violence in the run-up to the election. Opposition politicians have also accused the government of harassment.

President Museveni, who has been in power for 35 years, is hoping for a sixth term.

The 76-year-old says he is standing for stability. Meanwhile Bobi Wine - the stage name for 38-year-old Robert Kyagulanyi - says he represents the younger generation in one of the world's youngest countries, where the median age is 16.

On Friday, as the results came in, Bobi Wine said that Ugandan soldiers had surrounded and breached his home.

"None of these military intruders is talking to us," he said on Twitter. "We are in serious trouble."

But a government spokesman accused him of "dramatising" the incident "to seek sympathy".

"Bobi Wine at this moment is a very important person. It is the duty of the state of Uganda to ensure he is secure," Don Wanyama said.

What are the latest results?
Based on provisional results from two-thirds of polling stations, Mr Museveni has so far won 62% of the vote compared to Bobi Wine's 30%, the electoral commission said.

Election commission chief Simon Byabakama said the vote had been peaceful, and called on Bobi Wine, who said some of his polling agents were arrested on Thursday, to make public the evidence for his fraud allegations.

The opposition candidate believes the internet shutdown is being used to block communication and as a way of compromising the vote.

As well as being unable to get online, people have been having trouble sending text messages.

"Several of our phone numbers, including mine and my wife's, have been switched off, have disconnected illegally," said Bobi Wine, according to Reuters news agency.

"I will be happy to share the videos of all the fraud and irregularities as soon as the internet is restored."

The electoral commission says only two polling stations in the country reported major irregularities and voting was cancelled in those locations.

Mr Wanyama, who is a spokesperson for President Museveni, also hit back at Bobbi Wine's claims of vote rigging.

"He came short of the expectation of Ugandans," he said, speaking to the BBC. "He had no message and Ugandans have told him he has to wait a little longer."

Mr Wanyama added: "We have challenged him to provide proof for his claims, he has not a single iota of evidence."

BBC correspondents say there is tight security in the capital, Kampala, with soldiers and police patrolling the streets.

The EU, United Nations and several rights groups have previously raised concerns about the integrity of Uganda's election.

But, aside from an African Union mission, there is currently no major international group monitoring the vote. Earlier this week the US - a major aid donor to Uganda - cancelled its diplomatic observer mission to the country, saying that the majority of its staff had been denied permission to monitor polling sites.

How bad was the violence during the campaign?
Violence reached an unprecedented level in the build-up to the race, and dozens have died during crackdowns by security forces.

The government says the ban on gatherings was to prevent the spread of coronavirus while the opposition say it was a smokescreen for repression.

Bobi Wine and other opposition candidates have been arrested on several occasions, and during protests that followed one arrest in November, more than 50 people were killed.

Who is Yoweri Museveni?
Mr Museveni, who came to power on the back of an armed uprising in 1986, is standing as leader of the National Resistance Movement (NRM).

He has long been depicted to Ugandans as a liberator and peace bringer.

But he has managed to maintain his grip on power through a mixture of encouraging a personality cult, employing patronage, compromising independent institutions and sidelining opponents, says the BBC's Patience Atuhaire.

Who is Bobi Wine?
Bobi Wine is widely thought to be the strongest of the 10 opposition candidates in the presidential race.

The reggae star is known by his supporters as the ghetto president.

Over the last two decades Bobi Wine's musical output has been filled with songs about these issues and they have inspired a fervent following.

He grew up in Kampala's Kamwokya slum where he went on to build his now world-famous recording studio.