Next UK PM: Ben Wallace rules out bid and is 'leaning' towards Boris Johnson 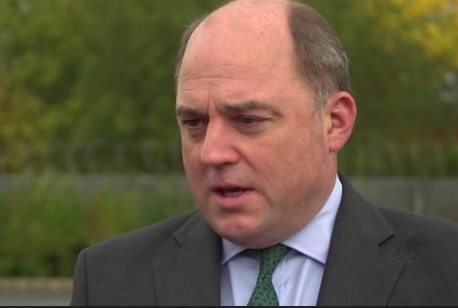 UK Defence Secretary Ben Wallace has ruled himself out of the Tory leadership race but says he is currently leaning towards backing Boris Johnson.

However the minister, highly popular with Conservative members, says he is still looking at the other "excellent" candidates in the race to become the next PM

Contenders to succeed Liz Truss have until 14:00 on Monday to gather the support of 100 MPs to run.

The fast-tracked contest will see a new PM declared by next Friday.

The decision will be in the hands of Tory MPs and possibly party members too.

Nobody has announced their intention to run yet - but Rishi Sunak and Penny Mordaunt are seen as contenders.


A comeback by Boris Johnson, who resigned in July following a series of scandals, is also a "real possibility", according to the founder of ConservativeHome.

Labour leader Sir Keir Starmer and other opposition parties have called for an immediate general election.

Johnson has a mandate - Wallace

According to a BBC report on why Ben Wallace is "leaning towards" supporting Boris Johnson to return as prime minister, the defence secretary explained that Johnson won "a huge majority" in the 2019 election and that he was "legitimately sent into Parliament as the prime minister based on the vote of the whole electorate".

"He got a mandate and I think that's an important thing for all of us to bear in mind," he adds.

But while Wallace says he is "leaning" towards backing Boris Johnson at the moment, the defence secretary says the former prime minister "will still have some questions to answer" about a parliamentary investigation into his conduct.

Johnson is still under investigation by the Commons Privileges Committee over whether he misled MPs over Covid rule breaking - and could face suspension or even lose his seat if it rules against him.

He adds he wants the party to "settle down", and he hopes Jeremy Hunt will stay on as chancellor, and that he will remain in his defence role under the UK's next prime minister.