Most important global events in 2022 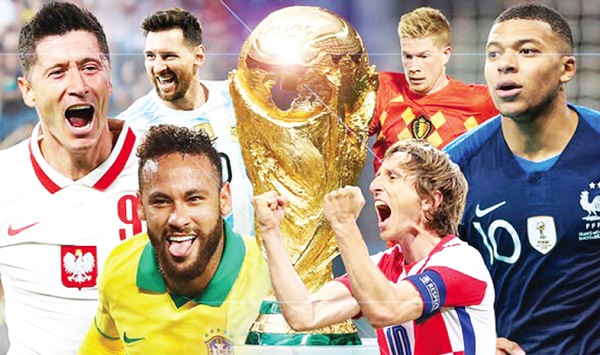 The year 2022 was a turbulent one which was defined by the breakout of war in Europe and saw the removal of nearly all COVID-19 restrictions and the reopening of international borders in most countries, and the global rollout of COVID-19 vaccines continued.

The global economic recovery from the pandemic continued, though many countries experienced an ongoing inflation surge; in response, many central banks raised their interest rates to landmark levels while the world population also reached eight billion people in 2022.

After months of growing tensions, Russia launched its full-scale invasion of Ukraine which began February 24 and was the largest armed conflict in Europe since World War II, caused the displacement of 15.7 million Ukrainians (8 million internally displaced persons and 7.7 million refugees), and led to international condemnations and sanctions and nuclear threats, the withdrawal of hundreds of companies from Russia, and the exclusion of Russia from major sporting events.

The Russian aggression against Ukraine shocked the international community. The European Union immediately announced that it would apply harsh measures against Russia. Rarely is it possible to galvanise a massive multi-country organisation to act with such determination. Since the start of the war, the bloc has been successively applying one package of sanctions after another which will continue until the war is over.

Finland and Sweden began considering joining the North Atlantic Treaty Organisation. The Kremlin managed to achieve the exact opposite of what it so loudly proclaimed to be trying to prevent: further NATO expansion.

Former PM Shinzo Abe was killed on July 7 while on campaign trail, days before the parliamentary elections. The murder shocked the nation and the killer’s alleged motives resulted in a reshuffle of the newly elected cabinet.

Mikhail Gorbachev, the last leader of the Soviet Union and the man who brought Eastern Europe out from behind the Iron Curtain, died on August 30 at the age of 91 “after a serious and long illness", Russian news agencies reported.

The United Kingdom had three Prime Ministers in two months. The fallout over “Partygate” eventually forced Boris Johnson to resign as PM on July 7 as more than fifty members of his government resigning in July to protest the seemingly endless parade of scandals on his watch. He was succeeded by Liz Truss who lasted just forty-five days, the shortest tenure of any British prime minister in history. Rishi Sunak, took the reins of power, bringing the three-and-a-half-month-long saga to an end.

On September 8, the death of Queen Elizabeth marked an end to the longest reign in the history of the British Isles and an end to what many dubbed, even during her lifetime, a “Second Elizabethan Era”. Elizabeth became the longest-reigning British monarch in history in 2015 after beating her great-great-grandmother Victoria’s record of 63 years. In February, Britain celebrated her 70 years on the throne with a platinum jubilee.

Charles is King of England

King Charles III, Elizabeth’s eldest son and the country’s longest serving heir apparent, acceded the throne upon her death, at the age of 73. A coronation ceremony for Charles III and his wife Camilla is set to take place in Westminster Abbey on May 6, 2023.

From mid-June into October, Pakistan was hit by its worst floods in history, caused by a heavier than normal monsoon downfall, coupled with the melting of glaciers. The floods, which at one point were said to submerge as much a third of the country under water, left more than 1,700 people dead and at least 2 million homeless.

Demographers offered various predictions as to the human population growth in the coming century. But November 15 last year saw the fourth time in less than five decades that another population landmark was crossed.

The 2022 World Cup in Qatar was the first one ever organised in a Muslim country. Messi’s Argentina won the World Cup. The men’s World Cup final happened less than three months ago but it seems already to belong to the annals of history. It was one of the greatest matches in the history of the game – not for the first, Argentina-dominated 80 minutes, but certainly from the moment France’s Kylian Mbappé scored his spot kick and lit a spark beneath both teams.

It was Mbappé’s match, as he became the second player to score a hat-trick in a World Cup final after Geoff Hurst for England in 1966.

Pele, Brazil football legend, died at aged 82 after a battle with cancer. He was the only player in history to win three World Cups, passed away at the Albert Einstein hospital in Sao Paulo following a battle with cancer; he became an icon of the game after winning the World Cup in 1958 as a 17-year-old, netting twice in the final to defeat hosts Sweden.

The year ended on a sombre note, with the Holy See announcing the death of Pope Benedict XVI, the first Bishop of Rome to retire in six centuries. The successor of Pope John Paul II retired from the Throne of Peter in 2013, but remained a revered presence in the Roman Catholic Church and served as a support to his successor, Pope Francis.