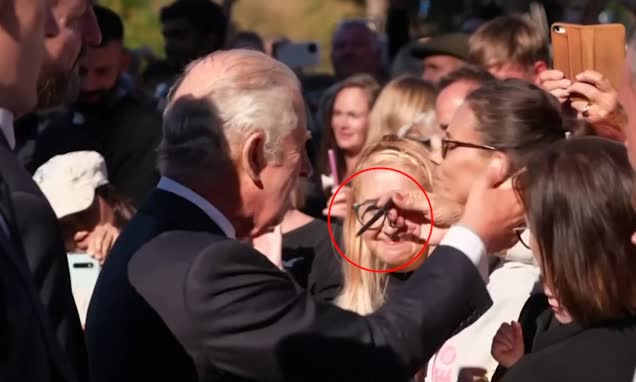 The new King Charles was given a pen 'just in case' by well-wishers on his walkabout in Cardiff yesterday after his latest ink disasters
30.5k Shares

The new King Charles was given a pen 'just in case' by well-wishers on his walkabout in Cardiff yesterday after his latest ink disasters.

This follows after the King was left furious by a string of ink mishaps during his visit to Northern Ireland earlier this week.

The public clearly caught wind of his frustration after clips of the monarch started circling online showing him visibly upset by the pen ordeal.

A video clip of the handover shows a woman in the crowd hand the pen to the King whilst cheekily smiling at him.

The surrounding crowd then start clapping and laughing at the gift.

King Charles then take the pen gracefully, looks down at it in his hand and starts laughing, clearly amused by the gesture.

The Monarch and the Queen Consort arrived in Wales yesterday in their first visit since the death of Queen Elizabeth II.

The Royal couple made their way to Llandaff Cathedral to attend a prayer and reflection service for his late mother and Britain's longest serving head of state.

However, the King came prepared with his own pen and was filmed calmly signing the paper in the cathedral before passing his pen and the book to his wife.

The King's decision to carry his own fountain pen comes days after a few drops on ink soured the mood at Hillsborough Castle, Belfast, earlier this week.

His Majesty appeared flustered by dripping ink as he tried to sign a book towards the end of his visit.

Charles complained about the pen he was using to sign his name, announcing he 'can't bear this bloody thing' as he appeared to furiously rub the ink from his fingers.

The Queen Consort later suggested it was leaking and asked for a replacement, as the King briskly turned on his heels and left the room flanked by aides.

The faulty instrument was swiftly removed and replaced by flustered courtiers before Camilla sat down to sign the book herself from inside the historic residence.

The clip at Hillsborough Castle begins with Charles asking what the date was, as he prepares to sign a visitors book in front of cameras.

Venting his frustration as the pen begins to malfunction, the new King exclaims: 'God I hate this [pen]' as he hands it over to the Queen Consort.

He adds: 'I can't bear this thing... every stinking time'.

The incident also came days after another pen mishap when viewers of Charles' historic accession to the throne found themselves distracted when the he furiously gestured to one of his aides to remove a pot of ink.

As he went to sign the historic Proclamation, the King frantically motioned to an aide to move a pen box from his desk, which viewers described as 'far too small' for the huge document and stationery.

Despite the gravity of the moment, viewers could not help but find the apparent difficulty the King had with the pen amusing.

Charles asked a nearby aide to get the box off the table so he could sign the second part of the large document.

The fountain pen set he used to sign the momentous document was a gift from his sons Princes Harry and William.

Some viewers joked the new King 'stole' the pen after spotting him put it in his pocket before taking it out again.