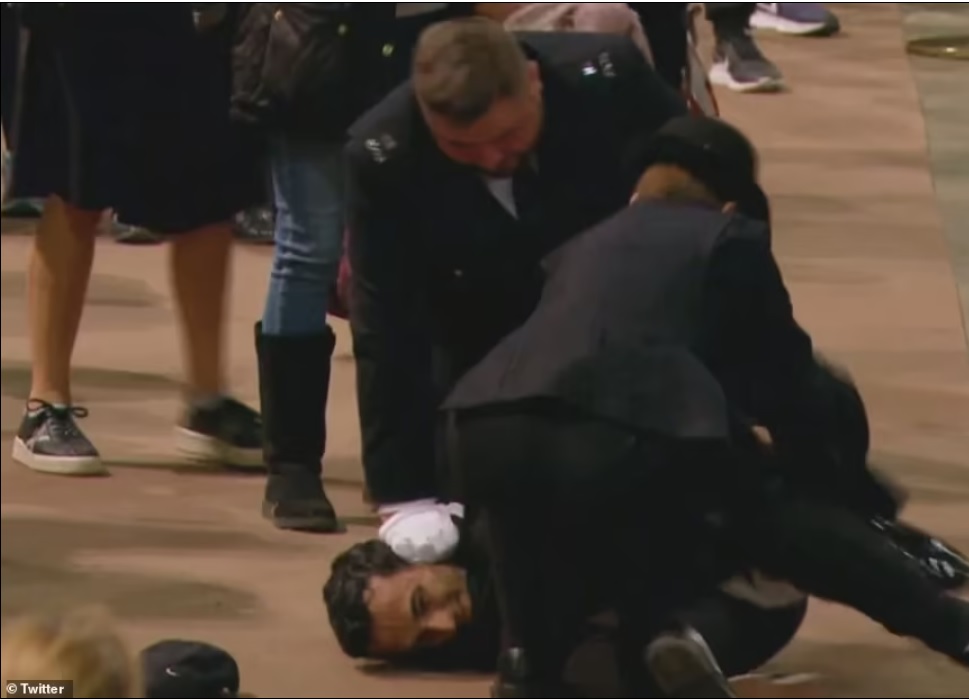 The man who grabbed the Standard smirks as he is held to the floor by police who had dragged him away from the coffin
30.5k Shares

The man arrested after rushing out of the queue of mourners and grabbing the Queen's coffin at the Palace of Westminster in a security scare that stunned police and well-wishers was behaving 'strangely' and had waited 14 hours to get close enough to the late monarch lying-in-state, eyewitnesses have claimed.

Officers tackled the man to the floor last night after he pushed through the queue, knocking aside a seven-year-old girl, in a scramble up to the coffin in the centre of the hall in London - and then touched the Queen's casket, even managing to lift the Royal Standard in which it is draped.

The Metropolitan Police said the incident occurred at around 10pm, as the live feed from inside the hall cut away for a brief period. A spokesperson told MailOnline today that a man had been arrested in Westminster Hall on suspicion of a public order offence and that he still remains in custody.

This morning, new Metropolitan Police Commissioner Sir Mark Rowley was seen patrolling the queue for the Queen's lying in state near Lambeth Palace in south London. He greeted mourners, including several who were wearing blankets after waiting in line for hours through the early morning, and walked from the east towards Lambeth Bridge.

Eyewitnesses today described the man's odd, even erratic, behaviour in the run-up to the security scare. Speaking to MailOnline, Jon Williams, who queued with the coffin-pusher before the incident unfolded, said: 'He stood out to me as we were in the queue for 14 hours from start to end and he was some way ahead of us, even so we noticed him as he stood out.

'And he only stood out as most people in the queue were talking to each other and interacting however he wasn't. I saw a few people next to him trying to strike up conversation but he seemed to keep himself to himself.

'He got to the coffin and seemed to lift up the flag, he didn't try to pull out off from what I could see. As I said people were in shock although they seemed to try to carry on. What surprised me is the guards didn't appear to move or help, it was all left to the police.'

A video grab posted to Twitter shows the moment of the incident at Westminster Hall. Police officers are tackling the man, circled, as he lifts the Royal Standard off the Queen's coffin

Another mourner who saw the incident described how a well-wisher 'screamed' when she saw the man running at the coffin. They said: 'We saw him (the man) in the queue from the beginning of the queue and throughout the day, he was by himself.  When we entered the room we were at the top of the stairs when we saw the incident. A lady screamed as it happened it was quite unnerving. Although he was detained and people kept calm and carried on.'

It came after King Charles III and his siblings entered Westminster Hall last night to pay a moving tribute to their beloved mother.