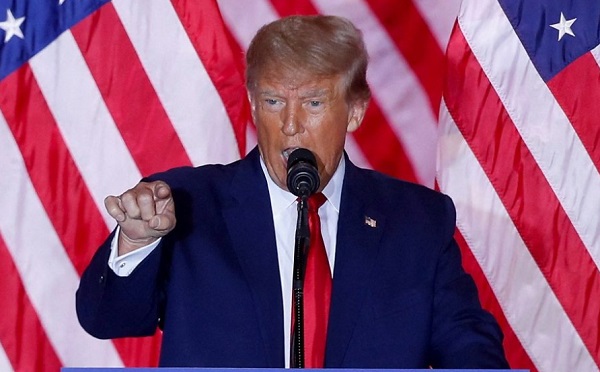 At his Florida estate, he said: "We have to save our country."

Mr Trump's announcement comes as some fellow Republicans have blamed him for the party's lacklustre performance in last week's midterms elections.

US President Joe Biden, who defeated Mr Trump two years ago, has said he may run for re-election in 2024.

Speaking from the ballroom of his Mar-a-Lago private club in Palm Beach on Tuesday night, Mr Trump said: "We are a nation in decline.


"We are a failing nation. For millions of Americans, the past two years under Joe Biden have been a time of pain, hardship, anxiety and despair."

He continued: "In order to make America great and glorious again I am tonight announcing my candidacy for president of the United States."

Minutes before his announcement, he filed paperwork with the Federal Election Commission declaring his presidential candidacy and setting up a fundraising account.

Mr Trump's unusually early declaration for the election of 5 November 2024 is being seen as a tactic to steal a march on potential rivals for the Republicans' White House nomination.

Though Mr Trump is the first to enter the race and instantly becomes the front-runner, he is expected to face challengers.

They may include his own former Vice-President Mike Pence, 63, and rising star Florida Governor Ron DeSantis, 44.

Mr Trump left office after one term in 2021, refusing to acknowledge his defeat by seven million votes and spreading baseless claims of an election stolen by mass voter fraud.

The debunked conspiracy theory riled up Trump supporters who rioted at Capitol Hill in the dying days of his presidency as lawmakers met to certify President Biden's victory.

Mr Trump became the first president ever to be impeached twice, though congressional Democrats were thwarted in their bid to remove him from office by Senate Republicans.

He ploughed ahead with his announcement on Tuesday despite pleas from advisers to postpone until after a run-off election for the Senate seat in Georgia next month, lest his candidacy prove too much of a distraction.

Some conservatives have faulted Mr Trump for the Republicans' failure to achieve sweeping victories in last week's midterm elections.

Though the party is on the cusp of winning the 218 seats they need to control the 435-seat US House of Representatives, it would be by a razor-thin margin.

Meanwhile, Democrats have retained control of the Senate and may even pad their majority after the December run-off.

Candidates he supported in key states like Pennsylvania, Arizona and Michigan were defeated after echoing his election conspiracies, while others won in Ohio, Wisconsin and North Carolina.

Mr Trump made no mention on Tuesday night of his potential rivals for the Republican presidential nomination.

He has nicknamed Mr DeSantis, who won a landslide re-election victory as Florida governor last week, as "Ron DeSanctimonious".

On Tuesday, Mr DeSantis was asked by reporters about Mr Trump's attacks, and said: "Check out the scoreboard from last Tuesday night."

Asked on Fox News if he would vote for Mr Trump, the former vice-president said on Tuesday evening: "Well, I just I honestly believe that we're gonna have better choices."

Mr Trump's White House bid comes as he is beset by criminal inquiries.

The Department of Justice is investigating the removal of files marked classified from the White House to Mar-a-Lago at the end of his presidency.

Mr Trump has defied a legal summons by a congressional committee that accuses him of instigating the US Capitol riot. And his property company is on trial for alleged tax fraud in New York.

If Mr Trump wins in 2024, he would be only the second president in history elected for two non-consecutive terms. The last was Grover Cleveland, a Democrat, in 1884 and 1892.