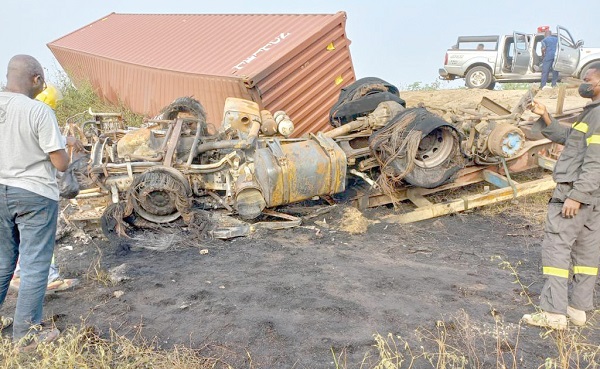 We have greeted the new year with new road fatalities and injuries
30.5k Shares

Senegal is mourning the death of at least 40 people while treating the injuries of about 80 others.

In Senegal on Sunday, January 8, 2023, at about 3:30 a.m. (local time) when the sun was still sleeping and hours away from waking up, two big commercial buses collided. The accident happened in the Kaffrine area.

The evidence and accident experts are pointing to a burst tyre that caused one of the vehicles to run into the other.

The Senegalese President Macky Sall tweeted his sorrow: “I am deeply saddened by today’s tragic road accident in Gniby …” and consoled the victims: “I extend my heartfelt condolences to the families of the victims and wish a speedy recovery to the injured.”

President Sall’s tweet met with a solidarity tweet from many among them President Emmanuel Macron of France: “My thoughts go out to the relatives of the victims of the terrible accident that occurred last night around Kaffrine. France offers its condolences and stands alongside the Senegalese.”

And we also mourn with the Senegalese people.

Though heart-wringing, road accidents are common in Senegal, affecting some 27,000 victims annually per estimates from the World Health Organisation (WHO).

Senegal’s road fatality is symptomatic of a larger African road fatality. African roads, and vehicles plying these roads, are responsible for a significant loss of lives and injuries on the continent.

Africa has about three per cent of vehicles in the world, yet road accidents on the continent represent about 20 per cent of the global deaths and injuries on roads, the WHO tells us.

Some 270,000 people, per numbers from the WHO, perish or sustain injuries on the African road every year. This is far more than the number of people who die in Africa from other causes. For example, the WHO puts the number of COVID-19 deaths in Africa at 174,153.

According to accident experts, the trend is tilted to worsen in the coming years with the number of road accident deaths and injuries most likely doubling by 2030.

The African accident victim is often the poor African who is only able to afford worn-out commercial vehicles plying some of the most dangerous stretches of the African road. These second-hand vehicles imported from elsewhere are prone to falling apart at any time.

Of course, bad roads contribute in major ways to accidents in Africa. But the factors are largely human.

Drivers and passengers appear fortified against road accidents as they refuse to wear seat belts (when a vehicle has them) or carelessly talk over the phone while careening away on the road.

The rule of law is fragile to non-existent on the African road with drivers glaringly exceeding the speed limits or inappropriately overtaking other road users while the bemused police officer looks on helplessly.

On the African road, life is cheap. Sunday’s accident in Senegal is yet another reminder of this sad reality.

All of this is familiar to Ghanaians. We have greeted the new year with new road fatalities and injuries.

On Sunday, January 8, 2023, two passengers were burnt to death in a road accident at Gomoa Potsin on the Kasoa-Winneba highway in the Central Region. Two others were severely injured.

A week earlier, on Sunday, January 1, 2023, four lives were lost in a road accident at Kojokrom in the Western Region; while many had minor injuries, others were severely injured.

The trend, if the past is a guide, is set to continue throughout this year, sadly, rendering our good record in 2022 useless.

I refuse to accept that God has a hand in our meaningless and avoidable daily road accidents in Ghana, Senegal and elsewhere in Africa. God does not hate us this much as to claim 40 lives on a holy Sunday. Our ignorance, recklessness and utter disregard for the sanity of human life when we are using the road are most likely responsible for the blood on our roads.

In 2004, the World Report on Road Traffic Injury Prevention was produced; it recommended ways of curbing road carnage in Africa. Africa has not followed through with the recommendations.

The Writer is a lawyer/doctoral fellow at Fordham Law School, N.Y., USA:
E-mail:pbatinge@fordham.