Joe Dee's final journey to his Maker from Burma Camp! 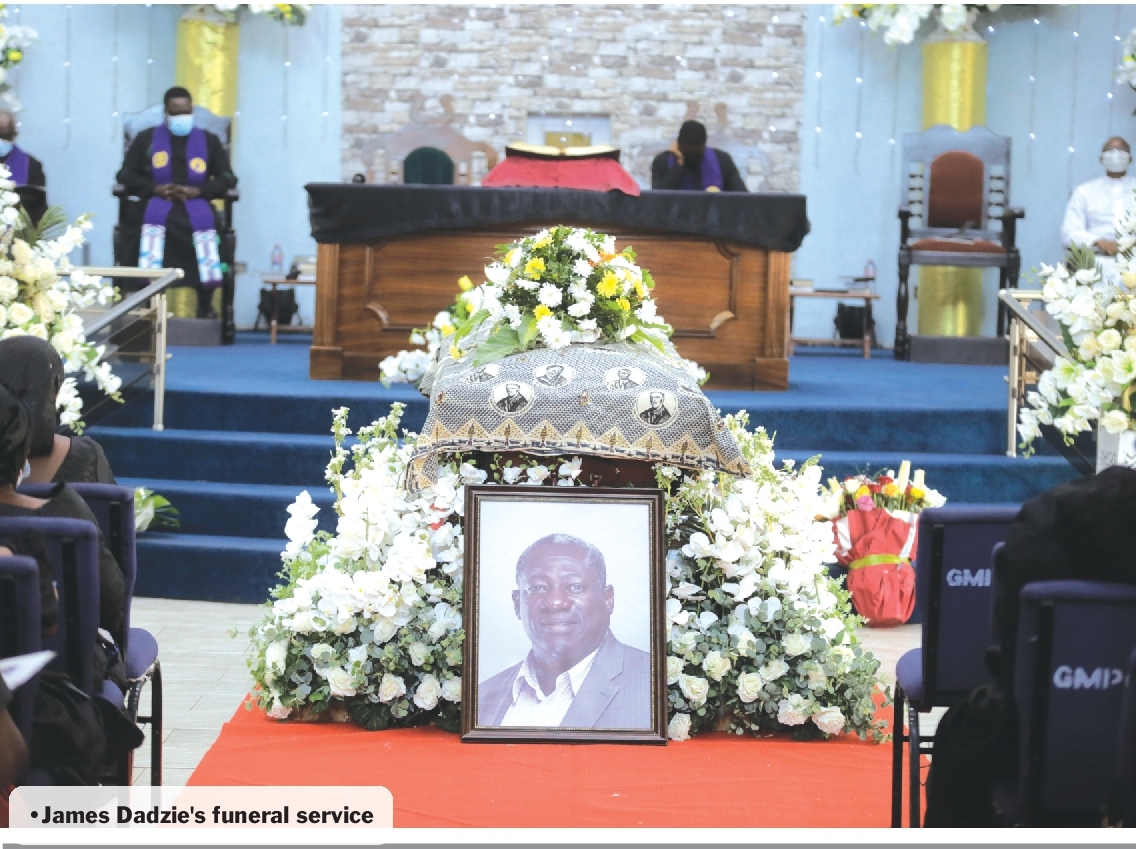 For the Military Police at the Checkpoint entry into Burma Camp, Saturday, November 20, 2021 must have been one of their busiest mornings in recent times with vehicular traffic.

All the vehicles with mourners in black were heading to the same destination, the Garrison-Methodist-Presbyterian-Church (GMPC).

A casual onlooker would have asked, “who is this famous general drawing the whole world to Burma Camp?”

Indeed, the church overflowed with mourners from all walks of life, many of whom had to sit outside.

Incidentally, the deceased was not a military man. Mr James Kwame Edu Dadzie aka “Joe Dee,” Managing Director of G-Pak Ltd was the one who drew the crowd to Burma Camp.

Working with the Graphic Communications Group Limited, Joe Dee had a huge number of mourners from his workplace.

Classmates and friends of the 1987 Year Group of Achimota School (Akoras), and indeed Old Achimotans in general were also there in their numbers.

So also were his classmates and friends of Swedru Secondary School, where he did his Sixth Form.

Also present in large numbers were his classmates of the 1993-Graduating-Class in Publishing Studies at the Kwame Nkrumah University of Science and Technology (KNUST), Kumasi.

A question many asked was, how come a burial service with Military Band present was held at Burma Camp for a civilian who was neither a member of Garrison Methodist-Presbyterian Church (GMPC), nor an employee of the Ministry of Defence?

Part of his biography read as follows: “As a young graduate, James had a dream and passion of becoming a soldier. He got enlisted in the Ghana Armed Forces as a member of the Ghana Military Academy Regular Career Course Intake 35 in November 1991.”

“However, his dream of becoming an Army Officer was never to be, as he was asked to step aside just a few months to commissioning. Though a painful event in the life of James, he accepted the situation like the strong man he was and quickly put the mishap behind him to pursue another career in civilian life.”

Despite the setback, Joe Dee maintained constant touch with his mates of Intake 35. Indeed, when he lived in Lagos, Nigeria, he hosted all mates passing through Lagos to the Command-and-Staff-College at Jaji-Kaduna, Nigeria.

Intake 35 therefore saw Joe Dee as one of them, who deserved to be seen off from Burma Camp to his Maker!

Indeed, they stood out as they were all dressed in black “batakari” smock! At the end of the service, they emotionally wheeled Joe Dee's casket to the vehicle that transported his remains to his home-town Agona-Nyakrom.

Intake 35 attended both the burial at Nyakrom and the Thanksgiving-Service the following day Sunday, November 21, 2021 at the St John's-Methodist-Church at Tantra Hill, Accra, where Joe Dee worshipped.

All the tributes read about him attested to the fact that Joe Dee was a born leader and a people-centred person. Like his desire to help others, his hard work knew no bounds.

He was also a good all-round sportsman who played basketball, volleyball, hockey and also participated in track-and-field. Doubtlessly, he was a team player.

One of the officiating ministers remarked that, Joe Dee had a forgiving heart. He explained that for someone who underwent the trauma he did in the Military Academy, he would have unforgivingly cut off all links with the Ghana Armed Forces out of bitterness.

However, the kind-hearted Joe Dee maintained links with his mates of Intake 35. Indeed, the night before he died, he was at Burma Camp with his mates for a get-together.

A major lesson that can be learnt from Joe Dee is that, leaders must eschew arrogance, greed, viciousness and vindictiveness, as they lead nowhere.

Leaders must also realise that, life does not always give us what we want. As the saying goes, “man proposes, and God disposes.”

We must see failure as part of the long road to success, and not be downhearted by it.

As Shakespeare said in his play, “As you like it,”“Sweet are the uses of adversity, which like the toad, ugly and venomous, yet wears a precious jewel in his head.”

Shakespeare draws an analogy between the beautiful pearl that grows in the oyster's head, and the medieval thinking that a toad had a precious jewel in the head.

Adversity did not prevent Joe Dee from moving on with life and realising his full potential in Publishing after leaving the Army!

Joe Dee died at 51 and was survived by his wife, a son and a daughter. May James Kwame Edu Dadzie's soul rest-in-peace!