Glad to be a woman 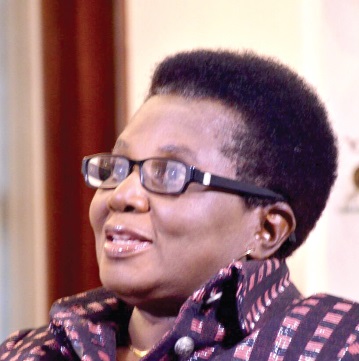 There is no way anyone could have missed it that last Wednesday was International Women’s Day.

The day was marked in a predictable and unpredictable manner and whichever of the special celebrations you noticed, it was enough that you couldn’t miss the point being made.

Break the Bias, we said and the world was being urged to break the bias against women.

I tell the story regularly about how disappointed my father’s two sisters were that as the first-born child of my parents, I was born a girl and not a boy.

If ever there were two tough women, my two aunts would qualify for that accolade and yet they took my arrival as a female as an affront and they blamed my mother for bringing forth a girl.

They obviously had difficulties with Biology and did not hold their brother responsible in any way for the sex of his child.

When my sister arrived as the second child, my aunts were beyond angry and were strangely not as angry as they had been about the first born child being female.

They did accuse my mother of having come to set up a Girls Boarding School in their brother’s home.

The boys did come eventually and in the Ohene household, there were as many boys as there were girls and therefore the tensions with my aunts gradually disappeared.

I have always wondered how come my father was so open minded about having daughters and didn’t feel he had been dealt an unfair hand in not having a boy-child as his first-born.

Even when as a young child, people were openly lamenting to my face what a great pity it was that I wasn’t a boy, dear Mr Ohene always said he was satisfied with his daughter and there wasn’t very much he could think of that a son would do that a daughter couldn’t do.

I don’t know if he was just being brave and keen not to make me feel unloved, but he certainly succeeded in building my self-confidence and equipping me to deal with a world that made life difficult for women.

Even having to do the household chores which were deemed to be the exclusive work for girls turned out to be quite a bonus.

In later life, you discover it helps you cope rather well and you can watch your colleague young men struggle when they leave home; they don’t know how to do anything for themselves, from laundry to frying an egg.

I know it is not the done thing for a female to admit to not being a good cook, but I discovered it was very liberating to say you did not enjoy cooking, even though being Mrs Ohene’s daughter you had no choice but to know how to cook and I can turn out a mean groundnut soup and my salad isn’t bad either.

But I would recommend to girls not to feel inadequate because they are not good cooks, nor to pretend to love cooking because they imagine every girl is supposed to be a good cook.

My view is, it is quite enough to know enough just so you don’t get lost in the kitchen and be conversant enough with two or three dishes your children will remember you by.

When in doubt, remember that all the great chefs in all the famous restaurants around the world are invariably male; cooking is not meant for females and it is perfectly okay if you don’t know how or don’t enjoy doing it.

Take a careful look at the skills that are supposed to be for males and work out for yourself which ones that if you master, will make life easier for you.

These days nobody would dare suggest that driving was something best done by men but during my time, it was a big deal, so, I learnt to drive assuredly and confidently and made sure I could change a car tyre and not get stranded helplessly by the roadside.

You learn the hard way that being a girl is a dangerous thing.

It took a while to realise that young boys are also in danger of being sexually molested but I think girls are at a much greater danger and need to be protected from predators that surround them.

The problem is that a young girl is not likely to identify the source of the danger and I would say it is never too early to teach a young girl about sexual molestation.

Last week when I wrote about the saga of schoolchildren marching at Independence and other anniversary parades, I told the story of President Kufuor’s forlorn attempt to stop the practice and his directive that if they must march, then the children should be given food and drinks during the rehearsals.

I promised there was a story that needed to be told from that experience.

I am telling that story here because I am writing about the girl and boy experience.

To ensure that the President’s directives were carried out, food parcels were brought to the Black Star Square during the rehearsals and this is what happened when we started distributing the parcels to the schoolchildren.

When the boys took their parcels, they immediately set to opening and eating the food in the packets and when the girls were given their parcels each one of them would go and quietly put the packet in their bag or under whatever jacket or top they had.

I was intrigued but said nothing the first day. The phenomenon was repeated the second day, the boys took their food parcels, wolfed it down and the girls put theirs in their bags.

Well, I couldn’t resist it and I asked a few of the girls why they were not eating their food and each one told me she was taking the parcel home so their mothers would add it to the household food and share.

Nobody had given any directive, all the children had simply been given food parcels, the boys ate theirs, the girls decided to take theirs home to their mothers to be shared.

I am not sure if it would have occurred to me to do this but those girls certainly all seemed to do it instinctively.

I wonder if this has anything to do with nature giving females the extra burden of having to be the vehicles for the reproduction of the species.

I have no questions or anxiety about being feminine; I have always had strong opinions about everything and that should therefore put me firmly in the category of being an activist on any and whatever subject.

So, I don’t quite know why the hesitation about being labelled as a female activist.

I like being a woman and even when I complain about the difficulties that women encounter in our societies, I find that in my very long life, there has never been a single day that I would rather be a man.

Last Wednesday in the midst of all the discussions and arguments that come with the celebration of the International Women’s Day, I decided I am a women’s activist.

Not quite sure what it was that has finally brought me to this acceptance, but that is it.