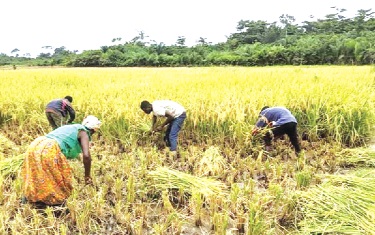 Recent economic challenges present much difficulty for the government, organisations, and the ordinary Ghanaian. Perhaps it is time to trade thoughts towards stabilising not only the economy, but also towards becoming self-sufficient.

This can be possible by having a positive outlook and embracing pragmatic approaches, with a spirit of patriotism. It is with this same lens that I foresee Ghana doing better with focus on or concentration in certain key areas.

Although popular discourse about the experiences of Ghanaians depict hardships, finding contextual solutions to these challenges is imperative, and requires the collective contribution of all.

Thus, a Ghanaian solution lies within its people, rather than elsewhere. Suffice it to say that, it is time to look within and harness available resources, embrace our uniquely rich culture, and be true to whom we are.

Nonetheless, inculcating honesty, tolerance for individual differences, and positive attitude in our endeavours will facilitate the attainment of our national goals.

Following independence in 1957, Ghana has gone for IMF bailouts 17 times, all in an attempt to stabilise its economy. Meanwhile, certain fundamentals that need attention for a robust economy remain under explored.

It is against this backdrop that I call on Ghanaians to take a second look at our taste for foreign products, our trading economy, educational system, policy direction, constitution, law enforcement, and the contribution of religious bodies towards national development.

As the taste of Ghanaians for foreign goods and culture, including language continue to accelerate beyond control, so does import, instead of export, and their associated foreign exchange implications on the economy.

Significantly, Ghana has diverse cultures, with each prescribing a distinct way of life, including food, fashion and language. Our taste for local products can therefore be stimulated and sustained through the promotion of these cultures.

There is the need for all of us to be encouraged to take pride in our heritage and display same to attract other locals and foreigners to earn the much needed foreign exchange. It is untenable that even caskets to bury our deceased relations are being imported, competing with locally produced ones because of the taste for the former.

In feeding our babies, we take delight in going for imported foreign products, when many of our locally produced baby foods are more nutritious.

The use of African clothing for work and other occasions, and the consumption of local foods should be encouraged.

A focus on local food production (e.g. rice, cocoa, cassava, yams, etc.), processing, and storage of excesses in appropriate silos for future use and export will help earn foreign exchange.

For example, Mim Timbers was producing furniture for export and not just dealing in raw logs; Rothmans cigarette, Coca Cola, Apino soap by Appiah Minka Complex Limited, and Pioneer biscuit in Kumasi, were all produced in Ghana.

Hence, the focus was on raw material, local manufacturing, and export instead of the present trading economy, which focuses on buying and selling.

The excessive concentration on imports has debilitating impact on the cedi. It is therefore important to revisit valuable historical practices to help build and sustain the economy by equipping individuals with the needed skills and knowledge.

Our tertiary education was initially structured to produce skilled personnel to fill gaps in the civil and public services or manage white collar jobs.

However, 65 years down the line, it is obvious that most existing industries and institutions do not have the same need for human resource like before.

Yet, our tertiary institutions have not changed focus to meet current needs. There is increasing demand now for graduates with the skills to meet the demands of the market.

This is where Science, Technology, Engineering and Mathematics (STEM) education remains key. It is refreshing that the Akufo-Addo government has been investing heavily in this sector.

The One District One Factory (1D1F) initiative is commendable, and we must all support the government to expand it to incorporate local food production to feed Ghanaians and reduce the import of foreign products.

Cuba produces doctors for other countries and receives remittances. Ghana can equally produce skilled labour for other countries to earn foreign exchange rather than lose our professionals including nurses, doctors and teachers, to other countries without any returns. The export of human capital is another means to reduce graduate unemployment, all of which can be directed by policy.

Policy direction is needed for an agricultural revolution. Ideas to increase labour to expand production for export include the National Service Scheme (NSS), which among other strategies strives to advance agriculture in the various regions of the country.

Increased governmental support is therefore needed to make farming attractive to the youth. In addition, the military, prisoners and NSS personnel would be valuable resources for state farms, land clearing, construction of roads, farm houses and roads leading to agriculture sites. This will reduce unemployment; high cost of local foods and promote export.

There is also the need to review policy to effectively regulate the use of foreign currency. Here all efforts must be made to stop the black market.

Constitutional review will help amend certain aspects of the 1992 Constitution that do not serve meaningful purposes.

Similarly, it will be appropriate to make room for new stipulations that will advance the course for a better Ghana. This will pave way for system strengthening and restructuring to suit current practices.

Similarly, the contribution of religious bodies towards national development must be encouraged. Even though some of the churches have invested in areas including and health, much still need to be done to reach the expected heights. It will not be out of place for the churches to raise bonds to invest in integrated agriculture.

The media should be seen to be playing a pivotal role in the country’s development efforts. The media should be circumspect and criticise constructively. The media could hype the efforts being made by the government to revamp the economy and that could also win many investors from outside.

The media should portray the good things done in the country; that too, could win more confidence, recognition and respect for the country.

There should therefore be effective collaboration between the media and the government as that will bring harmony, cohesion and significant impact in the growth and development of the country.

With all these properly situated in the political economy of the country’s developmental efforts, Ghana can surely rise again.

The writer is the Executive Director of the National Service Scheme. E-mail: This email address is being protected from spambots. You need JavaScript enabled to view it.