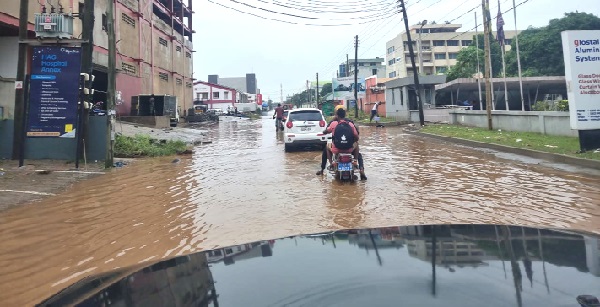 Inundation of Accra by flood has bec­­ome a major concern. It seems, however, that our attempts to address it have been targeted wrongly at removing the effects of the problem.

In essence, we have misplaced cause and effect in the attempt to alleviate the problem.

At the risk of understating some of the issues, I attempt a catalogue of some of the real issues of the floods:

The major storm drains in Accra have seen very little or no capacity expansion/modernisation since the 1960s.

These drains were designed when Accra ended at Airport Residential Area. There was no East Legon, North Legon, West Legon, Ashongman and many such newly build-up places.

All these new settlements were grasslands described as the coastal plains. Runoff was minimal because percolation was rife.

Today, hitherto uninhabited places are massive brick and mortar or “concrete jungles” with all sorts of roofs and pavements ranging from bitumen, pavement blocks and ceramic tiles, which displace large volumes of rainwater.

The Airport City, Villagio apartments and Accra Shopping Mall are all recent developments. A lot of buildings are springing up behind the GULF house – an area which otherwise served as a receptacle for rainwater from the Aburi mountains.

All those lands that served as a buffer between the Accra Airport and East Legon have been developed. The Adentan Aviation reserve is already being developed.

How can we expect the existing drains to perform efficiently in the wake of these massive developments?

Runoff is expected to increase at a higher rate. In the wake of the unexpanded capacities of our storm drains, we can only expect floods because we are displacing more water than our storm drains can accommodate. The consequence is flooding, especially downstream.

This situation is exacerbated by the unbridled redevelopment activities in places that I call “Accra Proper” such as Osu, Asylum Down, Adabraka, Cantonments, Labone, Labadi and other such places in the capital.

Every little space is being covered. Gardens of homes are being turned into massive apartment and commercial buildings without the least attempt to modernise the drainage system.

It has been estimated that the present system is able to resist pressure up to only 100mm of rain in Accra.

We should expect the floods to appear anytime Accra hits the 100mm plus mark given the prevailing circumstances – unless the process is halted by some drastic action.

I have had occasions to wonder whether the hydrological department of the Ministry of Water Resources, Works and Housing (MWRWH) exists.

There are minor drains (gutters) that end up nowhere – no planned discharge point. There are drains that are covered up to a point and then opened at the other end.

What exactly are these designs expected to achieve and is there anybody in charge or supervising these works?

Drainage systems in the past were integrated and linked somehow. They formed a network. What we see today is a completely disjointed drainage facility.

The worrying aspect of this phenomenon is that the little resources available end up being wasted through uncoordinated drainage construction and poor designs.

The systems are, therefore, not able to perform their core function of draining the city as expected. This is the reason for water entering the rooms of low-lying communities.

Most of the new settlements in Accra are hardly planned. Unplanned settlements mean unplanned drainage systems where runoff finds its own course to the sea/lagoons or lakes.

Institutions such as the District Assemblies (DA), Survey Department and the Town and Country Planning Department have not worked to ensure that settlements are properly planned and integrated into existing settlements downstream.

Activities of landowners have had a debilitating effect on proper layouts and functional block plans.

The IGF aspect of permit issuance has been placed above professional ethics of issuing building permits.

City authorities lack capacity and will to enforce building rules and regulations.

The Environmental Protection Agency’s (EPA’s) role is hardly noticeable as buildings and fuel stations are sited on lagoons and river basins respectively.

Developers do not conform to building codes. The entire physical planning process in Ghana is totally compromised.

I am not too sure whether the mayor himself would be able to tell the geographical limits of Accra. Failure of the planning and regulatory institutions to deliver on their mandate has meant that the city continues to sprawl.

The net effect is spatial disorganisation which has the potential to create flooding downstream. This is the major source of the silt that we continue to de-silt at great cost. We have made too much space bare.

Until the larger issue of effective planning is resolved, the sanitation challenge will continue to live with us. Let me use the Cantonments road (Oxford Street in Osu) to illustrate.

In the early 1970s, that street had just two supermarkets: the Cans Bakery and the Modern Bakery. There was also Palmer’s Kiosk which later became Diamon Supermarket.

Today, what used to be Cedar House on that same road has been replaced with Koala Shopping Centre. The house next door which belonged to a Lebanese family (and later turned to FIFO/KADMUS Electricals) is now occupied by the huge Agyeiwaa Building.

The other side of the road is no different. Massive transformation has taken place and continues to take place on that side as well.

It is surprising, however, that the road width remains the same. So does the drainage system. The gutters are the same small old shallow gutters that used to be there in the 70s, despite the massive population and traffic influx to the area as a result of these developments.

Today, the gutter in front of Frankie’s spills over and the stench from the waste water flowing on the road is unbearable. The sanitation issue on that street can be attributed to inaction on the part of the Department of Urban Roads (DUR), EPA, Town and Country Planning and Accra Metropolitan Assembly (AMA).

It is the failure of these agencies to act which generates the filth. Such massive transformation of land use must be accompanied by commiserate infrastructure.
How do we expect these shallow drains to accommodate waste water from the SSNIT Hospital or Frankie’s? Where do all those trading on the pavement urinate or defecate? Drains would definitely be choked!

Growing up, milk was packed in paper bags. I saw shopping bags made of paper in the Ringway GNTC. Cascade ice creams and Fan Kiss were in paper pouches.

The meat cottage wrapped meat in plain paper. They were biodegradable. Where did these black plastic bags come from? They are all over.

The biggest danger is that it is gradually infiltrating the countryside. I was shocked at the level of plastic pollution in the Brong Ahafo Region in a recent trip to Nkoranza via Ejura.

Our farmlands are under threat of plastic pollution – a serious potential danger to agriculture! Our institutions must begin to work: the Food and Drugs Authority/ Ghana Standard Authority/Ghana Institute of Packaging/ Institute of Applied Science (UG). We should endeavour to develop cheap biodegradable packaging material.

Let us tackle the causes of the sanitation challenge and stop targeting the effects. It will not resolve the issue. We would be wasting too many resources than otherwise necessary.

The writer is a Development Consultant. E-mail: This email address is being protected from spambots. You need JavaScript enabled to view it.