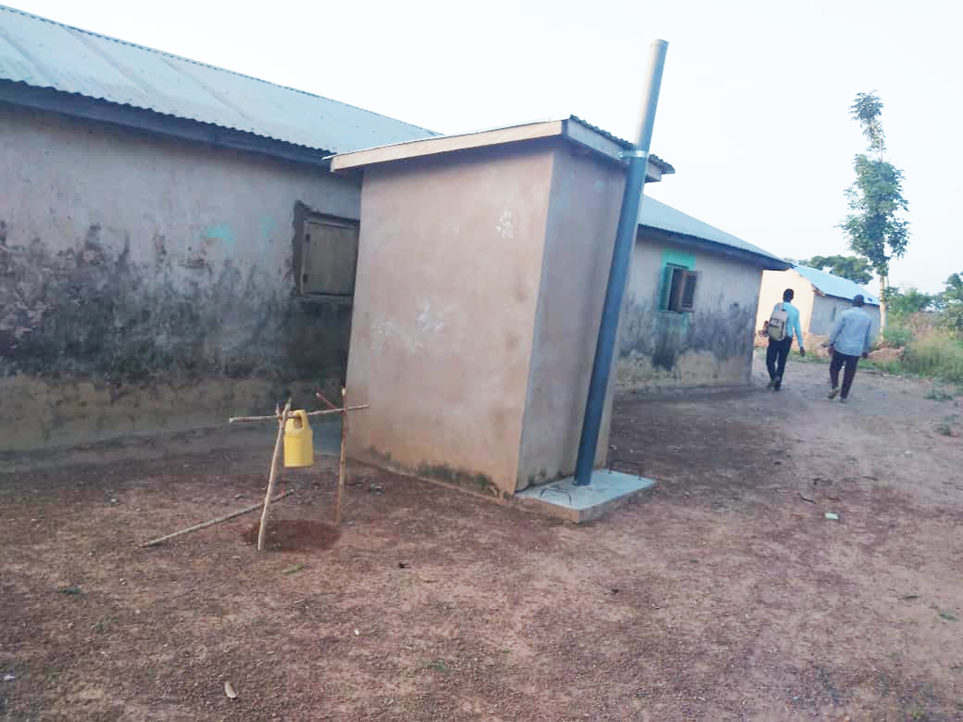 A toilet facility constructed in one of the communities
30.5k Shares

Residents of Kpandai have a lot to be thankful for, some of which ordinarily would have been glossed over by many.

“We have had our pride and dignity restored because we no longer compete with each other to defecate in the open, snakes and other reptiles don’t bite us anymore and our health situation has also improved because we now have toilet facilities,” Ms Bawa Agness, 35, a resident of Kwata-Pe and Ms Nduwa Alice, 44, a resident of Takarini, both in the Kpandai District in the Northern Region said.

Their home, like many others in the densely populated farming communities in the district, did not have toilet facilities until 2018.

The women recounted that they used to compete with men and children in nearby bushes in the backyards of their homes, as well as on refuse dumps to attend to nature’s call, not only at night but also in the full glare of everyone during the day.

“As women it is not easy when you don’t have a toilet in your house, it is a bad thing. Sometimes, you walk for long hours to go and defecate in the bush even at night,” they said.

In 2018, they had their pride and dignity restored, and their plight alleviated after they were assisted by UNICEF and the Kpandai District Assembly as part of the Rural Sanitation Module and Strategy (RSMS) programme, a behavioural change approach used to educate and help households to consciously own and use traditional improved toilet facilities to help eliminate open defecation.

Under the programme, the residents were sensitised to how to observe basic sanitation practices, as well as use basic materials to construct toilet facilities in their homes.

Though it was difficult for the community members to adapt to the approach, education on the health implications of open defecation enabled them to collectively embrace it.

Funded by Global Affairs Canada, the project also used local technology and artisans to provide tailor-made latrines for the residents.

According to the United Nations (UN), 19 per cent of Ghana's population still engages in open defecation, a practice which is a major health risk, especially among children and other vulnerable groups.

This implies that in spite of the various interventions undertaken by various development partners and the government over the years to ensure the attainment of an open defecation free (ODF) status by 2030, a significant number of the population are still engaged in the practice.

Adapting to the new approach was something the residents had a challenge with, as they were used to the practice of open defecation. It was a long and tough journey but with time they became enlightened and embraced the new approach.

The natural leaders embarked on house-to-house visits to sensitise them to environmental practices and worked with them to put in interventions that would facilitate their compliance with what they had learnt.

“Community members continue to use their household toilets and those whose latrines collapsed during this period have rebuilt and others have upgraded theirs into more sustainable ones,” he said.

He indicated that the assembly, as part of its plan to sustain the gains made in making communities ODF, was planning to work with communities which had already attained ODF status to enable them to move to a sanitised ODF status.

Poor Water, Sanitation and Hygiene (WASH) is the main cause of faecally transmitted infections (FTIs), including cholera and diarrhoea diseases, which remain the second leading cause of morbidity and mortality among children under the age of five, and the leading cause of death in sub-Saharan Africa.

Over 3,600 children die of diarrhoea every year in Ghana, the Global Health Observatory data repository has revealed.

However, checks at the Evangelical Church of Ghana Hospital in Kpandai, which is the largest referral centre in the area, indicate that there has been consistent reduction of sanitation-related cases in the facility for the past years.

The Medical Superintendent of the facility, Dr Joseph Sonlar, said: “In 2018 we had cases declining from a monthly admission of 110 to 33 at the end of the year, and in 2019 the cases decreased from 32 to nine, which is an indication that the cases are dropping over the years.”

He attributed the decline in diarrhoea and other sanitation-related cases to the improved sanitation situation in the area.

Financing has been identified as a gap that hinders the fight against open defecation, as most people are not able to afford the cost of constructing toilet facilities.

To address the financing gap and provide sustainable toilets, various interventions were introduced in the community, including the Village Savings and Loans Association’s (VSLA, Sanitation Social Support Intervention and District Sanitation Fund (DSF).

The VSLA concept was introduced in the community in 2016 to enable the community members to mobilise resources through savings to build household latrines and to improve their livelihood, especially among the women.

It brought direct support and coaching on periodic bases to the groups as members within the groups were contributing financially in building sustainable latrines.

With the Sanitation Social Intervention, poor and vulnerable households who met the selection criteria received support to construct and own improved latrines.

A WASH officer at UNICEF Tamale, Mr Issifu Adama, indicated that all those who took the loans to build the latrines were repaying on time, adding that “within a year about GH₡100,000 were disbursed as loans to the residents and so far, there has been a recovery of about GH₡80,000”.

He noted that though some progress had been made in the fight against the ODF because the people were adopting the new approach, funding continued to be the main challenge and called on the government and various partners to speed up efforts to set up District and National Sanitation funds to support sanitation programmes.

Today, November 19, Ghana joins the rest of the world to mark World Toilet Day (WTD) to raise awareness of the world’s high number of people living without access to safely managed sanitation.

This year’s event is on the theme: “Sustainable Sanitation and Climate Change,” and seeks to reiterate the need to tackle the global sanitation crisis to achieve Sustainable Development Goal 6, which talks about ensuring availability and sustainable management of water and sanitation for all by 2030.

With the successes chalked up in improving sanitation in Kpandai and other districts across the country, it is obvious that the future is bright and with much dedication and investment in the sanitation sector by the government and its partners, Ghana’s quest to meet the SDGs would be realised.