Why Kaneshie is drowning in floods 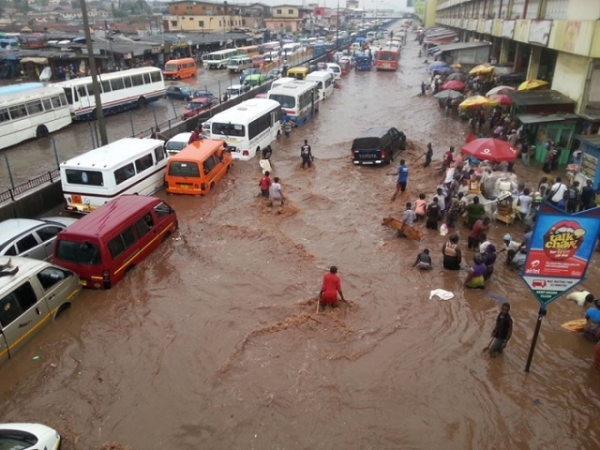 What started as lovely drizzles to end a hot Friday in Kaneshie ended as a disaster after homes, shops and offices got flooded after hours of rain on October 2, this year.

The entire stretch from First Light through the street in front of the Kaneshie Market, as well as the Takoradi/Cape Coast lorry station to Pamprom on the Odorkor-Kaneshie road, was so flooded that it was a cacophonic spectacle as if it were a movie, with stranded vehicles and commuters wading in the water.

Madam Theresa Buston and her family had to struggle all night to save their belongings, to no avail.

From mattresses, clothing, electrical and electronic equipment, her family had to keep wake and watch flood waters rise over a metre in their home.

Theresa said she could not sleep because she lost everything.

Her furniture, fridges, food, clothes, documents and other belongings were all gone.

“The flood waters were up to my breast line.

We stood in the water all night because there was nowhere else to go.

Seeing all my things get destroyed broke my heart.

It took the grace of God that the kids were not swept away by the flood waters,” she said.

According to Theresa, if nothing was done about the situation, they would be rendered homeless and destitute.

“We were swimming with the ‘borla’ because people throw rubbish into gutters and it chokes them.

Why are we doing this to ourselves?” she asked.

That was not the first time the Buston Family had to deal with flooding.

However, the intensity of the flooding keeps increasing, with rising levels whenever it rains.

Aside from salvaging their belongings when the flood waters recede, they have had to spend precious time to remove tonnes of garbage deposited in the rooms and compound as a result of the indiscriminate dumping of refuse.

The Buston family is not the only one affected by the increasing flooding incidence in the Kaneshie area.

Abubakari Abbey has had to deal with the painful loss of goods in his shop.

“We have been experiencing crazy flooding for the past three months and we are really stretched in every way.

With COVID-19 and the challenges, losing my goods to the weekend’s floods is making things difficult for my family and I,” he lamented.

Another resident, Muntari Abubakari, said: “Water entered my shop when I came to work.

This is not the first time this is happening.

But it was worse this time.

Look at the waste we are cleaning from here.

If we don’t manage the waste well, why won’t floods kill us?”

Flooding in Kaneshie is not new, but it is becoming more destructive due to a myriad of factors that are compounding the effects.

The capacity of the main drain to contain flood waters is reduced because it gets choked with waste when it rains.

The main component of the waste that clogs the drains are plastics.

Although plastics have been pivotal to economic growth, plastic waste is one of the leading pollutants in the world currently.

After a short first-use cycle, 95 per cent of plastic packaging material, with a value of between US$80 and US$120 billion annually, is lost to the economy.

A staggering 32 per cent of plastic packaging escapes collection systems, generating significant economic cost by reducing the productivity of vital natural systems such as the ocean and clogging urban infrastructure.(WEF, EMF, & Mckinsey, 2016)

More than 3,000 tonnes of plastic waste is generated in Ghana each day.

It is estimated that about 85 per cent of this could be recovered from the environment and turned into valuable raw material.

As Theresa Buston and her family continue to suffer the effects of flooding aided by plastic waste, how do we work together to save the situation and prevent the regular heartbreaking experiences? #STOPTHETRASH

The Earth is an interconnected system of pressures, causes, effects and impacts.

An activity in one corner of the earth can cause havoc in another.

What happens upstream usually has effect downstream, and vice versa.

For example, a young man on the University of Ghana campus at Legon buys ice cream.

After enjoying it, he fails to dispose of the container properly and it ends up littering the space.

It rains shortly after his irresponsible act and the container finds itself in the drains.

A family at Kwabenya doesn’t have any proper waste disposal system.

This family dumps its waste in the drains whenever it rains.

The waste then clogs the drains and impedes the flow of water.

Mr Akoto’s house at Achimota has a fully tiled compound with three mango trees in front of the house.

When it rains, the winds cause the leaves of the trees to fall and the intense runoff from the tiled compound carries the waste into the drains.

Three different activities in three different locations unbeknownst to those involved combine their pressures and cause havoc about eight kilometres away.

The young man at Legon, the family at Kwabenya and Mr Akoto’s house are contributing to the blocking of drains and the increased collection and flow of water somewhere at Kaneshie, where hundreds of families struggle to survive whenever it rains.