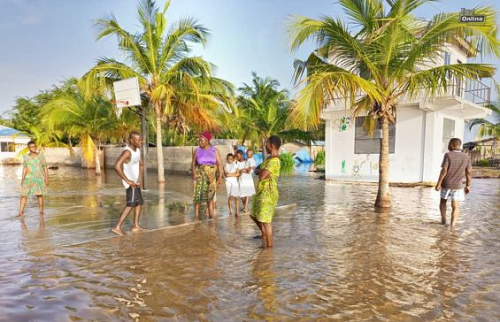 Amid the devastation of the Keta tidal surge, the National Disaster Management Organisation (NADMO) supplied relief items to affected residents.

While commending that, it is pertinent to note that the usual Ghanaian risk response culture is not enough. The coastal flooding along the coastline of Keta-Aflao has been an ongoing issue for more than a decade.

The government commenced the Keta Sea Defence Project as an adaptation measure to save the vulnerable coastal population from the coastal disaster.
I anticipate the government to refocus on the project.

The squabbles between some members of the majority and minority caucuses in parliament over the flooding in Keta, highlights the flaws in our democratic system.

Our representatives argued about the cause of the tidal wave. What would it have cost to invite experts to ascertain the facts surrounding the disaster?

One side of the House blamed the disateron sand winning along the coast, citing disputed photographs as evidence. The other linked it to rising sea-levels, perhaps influenced by climate change.

According to the latest assessment from the Intergovernmental Panel on Climate Change (IPCC), the global mean sea level rose by less than one metre over decades.

Initially, the IPCC stated in its Special Report on Ocean and Cryosphere in a Changing Climate (2019) that the Global Mean Sea Level (GMSL) had risen by 17 cm during the 1900s.

That has been unmistakably linked to human-caused climate change. As a result, there is no denying that climate change is influencing sea-level rise.

But it is worth noting that while observed trends of global sea-level rise and even projected figures are important, they are not sufficient to explain sea-level rise on a local scale.

Relying on the IPCC’s information, a study found that the lower the scale, the more tidal surge are likely to be influenced by variables other than climate change.

Local sea-level rise may be greater or lesser than the global average, depending on local coastal processes such as natural or human-caused land subsidence.

So, those involved in the unfortunate altercation in the precinct of Parliament House, from both caucuses may be right in attributing the tidal surge to local activities and sea-level rise (caused by anthropogenic climate change).

If our MPs are concerned about solving the perennial coastal flooding, they should engage in bipartisan cooperation to find solutions rather than the near-brawl over the causes of the tidal surge seen on camera.

Scientific knowledge should be sought to better understand the context-specific dynamics of the problem and from that build new coastal models and effective adaptation strategies.

This should be done with zeal and speed. To address the intricacies connected with the problem, policy-making procedures should be participatory.

While the Keta Sea Defence Project is a great initiative, studies have shown that no standalone adaptation project (either hard or soft measure) can address the complexity of issues associated with coastal adaptation.

Hybrid adaptation techniques developed following risk assessments and adaptation studies, will be more effective and provide a long-term solution to the problem of coastal flooding.

The government must be awakened by the current unprecedented tidal wave and take anticipatory measures now, rather than the too often reactive responses, which are costly.