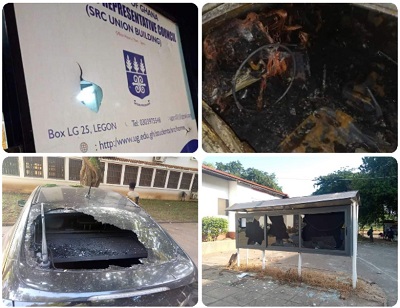 The riot on the University of Ghana campus is alarming and calls for action. Unfortunately, the university authorities are not taking the right steps to resolve the issue. The university council has placed priorities on slapping Commonwealth Hall with hostile sanctions rather than finding perpetrators and bringing them to book.

Most controversial among the council’s decisions is a plan to convert Commonwealth Hall into a mixed-sex hall.

In 2018, KNUST adopted this particular strategy to curb inter-hall clashes. The decision left the former Vice Chancellor of KNUST’s administration besmirched by a violent clash that led to the destruction of the university’s properties.

Many believed the decision was a step in the right direction until the two halls, Katanga and Unity Hall, clashed during an SRC vetting.

A few weeks ago, the same halls, although already converted into mixed-sex halls, were involved in another violent confrontation.

UCC also witnessed a clash about two years ago between two mixed-sex halls - Atlantic and Oguaa halls. Properties were destroyed during the clash.

Proposing a mixed hall status as a solution to this disciplinary crisis, considering what has happened in other institutions exposes UG’s inability, and perhaps, unwillingness to find reasonable and long-lasting solutions to the problem.

Whenever an individual is diagnosed of an ailment and efforts are being made to find a cure for the disease, the potency of the remedy must not be limited to impacting only the person whose condition raised the alarm.

The remedy must be powerful enough to relieve others who will contract the disease both in the present and the future.

UG management’s approach to the situation must be prospicient and holistic to tackle potentially threatening situations in the future, as well as current happenings that people’s attention are not usually drawn to.

In future, there could be misunderstandings among members of the halls with no records of existing rivalry, which can spark conflicts.

In 2020, UCC experienced an unusual confrontation between the residents of Oguaa Hall and Atlantic Hall, which saw the destruction of several school properties.

There are also factors like campus elections which are capable of leading to clashes. During my time as a student, we witnessed students armed with weapons and sharp implements during SRC elections, fully prepared to ‘guard’ the interests of their respective candidates by any means possible.

Last year, for instance, before the UGSRC election results were announced, supporters of two camps were reported to have engaged in a violent confrontation.

Management must also not lose sight of the fact that UG campus is filled with outsiders who frolic the community during the day and attack students at shady hours. On several occasions, students have fallen victim to such criminals who lurk around.

Even residents of Commonwealth Hall, who are enduring a ‘predator’ reputation on campus, have had a fair share of attacks.

The university once witnessed students from KNUST teaming up with some residents of Mensah Sarbah hall to abduct a resident of Commonwealth Hall and subjecting him to severe torture.

We also woke up one day and found out the Commonwealth Hall Alumni bus had been smashed by unidentified individuals.

These are all issues of concern to the university, which, of course, the conversion of Commonwealth Hall into co-educational status would be of no significance in addressing them.

The only way the university can bring this situation under full control is to put in place measures to identify and sanction perpetrators.

There must be a system that will intimidate and deter individuals from carrying out such silly acts.

Converting Commonwealth Hall into a mixed-sex hall is not the solution to this problem.

The writer is a former Commonwealth Hall JCR Secretary. E-mail: This email address is being protected from spambots. You need JavaScript enabled to view it.