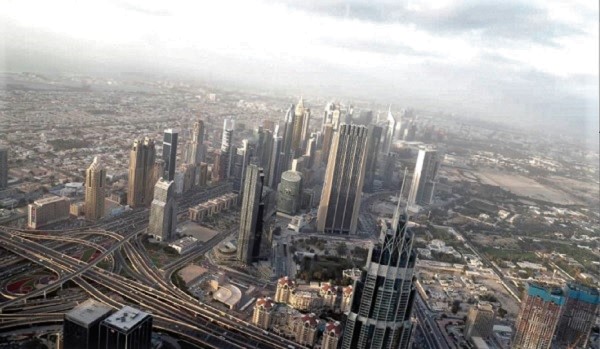 It had always been my dream to visit the 163-floor Burj Khalifa in Dubai, currently, the world’s tallest building at 828 metres (2,716 ft), having already had the opportunity to visit the Shanghai and Canton towers, both in China, which take the spots as the second and third tallest structures in the world built by man.

In view of that, when the opportunity presented itself during a recent visit to Dubai in the United Arab Emirates (UAE), I made a dash for it.

There, in its majestic glory, stood the Burj Khalifa named after the President of the UAE as we approached the iconic building in the afternoon of Thursday, February 27, 2020, incidentally the last day of a media familiarisation tour organised by Emirates that took selected Ghanaian journalists to the UAE.

Before doing the ascent to the observatory on the 125th floor of the rocket-shaped imposing structure, the team went through the Dubai Mall at the base which offers patrons a unique shopping experience.

One of the intriguing writings on the walls by the Vice-President of the UAE and Ruler of Dubai, Sheikh Mohammed bin Rashid Al Maktoum, read: “The word impossible is not in the leader’s dictionaries. No matter how big the challenges, strong faith, determination and resolve will overcome them.”

Flight into the sky

After going through the necessary security checks, we had to wait patiently at the base of the tower in front of three elevators as patrons who were returning poured out in their numbers.

Two of the lifts were bound for the 124th floor while one was headed for the 125th level.

We chose the lift bound for the higher level when it was our turn to board and at supersonic speed we went up, reaching our destination in just 77 seconds.

Sprawled beneath us was the Dubai city. It was a spectacular view. One that could only be had on board an aircraft. But here we were in the sky seeing all the buildings and massive infrastructure on the ground dwarfed by the Burj Khalifa.

However, before we could take in the beautiful view below us, we were literally chaperoned to a spot, told how to pose and asked to take a mandatory group photo which was not free anyway. Afterwards, we were given a coupon with which we would claim our photo on our way out.

It was a beehive of activity when we landed on the observation floor. Many tourists were not only enjoying the breathtaking view of the earth below but were also busily taking selfies, making sure that the fantastic view beneath showed as they positioned themselves at various angles to get the desired result.

We spent about an hour and a half also taking in the view from different spots on the 125th floor which also has a souvenir shop, as well as the 124th (the main observatory’s only deck that offers a 360-degree view of the city) which is linked by a winding staircase.

It was a matter of course that we also joined the bandwagon, taking selfies and other photographs that would tell the story many years later after we had left.

Interestingly, a writing on the wall inside the tower aptly describes the experience of visitors. It says in part, “I am the magnet that attracts the wide-eyed tourist, eagerly catching their postcard moment, the centre of the world’s finest shopping, dining and entertainment and home for the world’s elite.

“I am the heart of the city and its people; the marker that defines Emaar’s ambition and Dubai’s shining dream.

“More than just a moment in time, I define moments for future generations. I am Burj Khalifa.”

We eventually descended just in time to witness a lovely fountain display (the Dubai Fountain) that occurs every 30 minutes from 6 p.m. to 11 p. m. every day outside the Burj Khalifa, which unfortunately lasted only few seconds.

Many visitors were also lined up along the rails barricading the water from which the colourful fountains would spring up.

Burj in Arabic means tower and Khalifa is the name of the Ruler of Abu Dhabi and President of UAE. Originally called Burj Dubai, it was to honour the President, Sheikh Khalifa bin Zayed Al Nahyan, that the tower, designed by an American architect in Chicago, Adrian Smith (Skidmore, Owings and Merrill LLP), was renamed after him.

The main construction company that built the tower was Samsung Engineering & Construction from South Korea with the support of Besix and Arabtec.

The construction of the tower was estimated to cost US$1.5 billion and owned by Emaar Properties. It was started in 2004 and the tower was opened to the public on Monday, January 4, 2010.

At the base of the tower on the first 10 floors is a hotel of designer Giorgio Armani (304 rooms), on top of the hotel are residential apartments and from there to the top are office spaces.

The mixed-use tower has 165 livable floors comprising over 1,000 luxury apartments, as well as a restaurant on the 122nd floor named Atmosphere, the world’s highest nightclub on the 143rd floor and observation decks on the 124th and 125th floors.

There is also the second highest swimming pool in the world on the 76th floor, a new observation deck on the 148th floor which is at the height of 555 metres and recently a new lounge was also opened on the 155th floor.

Six hundred metres of the tower is made up of concrete and above 600 metres to 828 metres is made up of steel to give the tower some flexibility to sway in strong winds which can reach about 90 miles an hour. 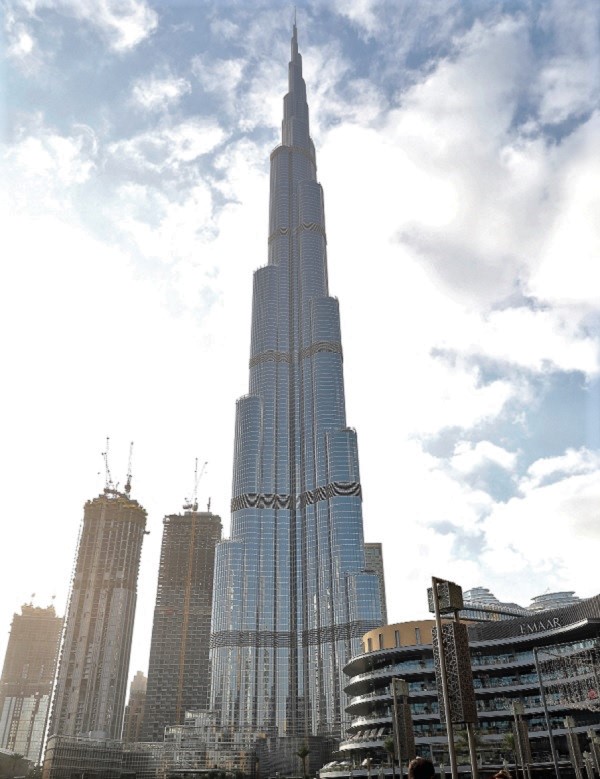