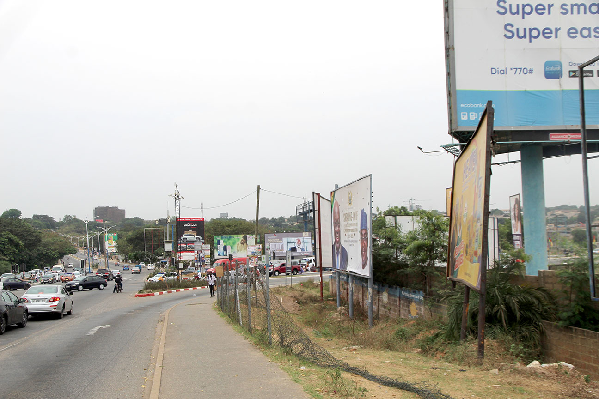 Billboard advertising is preferred by companies because of their effectiveness in building brand awareness and broadcasting products or services to as many people as possible.

Placed in busy areas, billboards tend to have the highest number of views and impressions, compared to other marketing methods.

In recent times, the mounting of huge billboards has become a big market for the outdoor advertisement sector. Due to that, billboards are fast cluttering up the road infrastructure space in Accra.

For some years now, Accra’s beauty is being destroyed by poor management and maintenance with billboards carelessly ‘strewn’ along roads and highways.

Some ceremonial routes have not been spared this menace, a development which has affected the general beautification of the city.

Although the assemblies are mandated to control and collect levies on these outdoor advertisements, they have focused on collecting the levies, paying little attention to the aesthetic aspects.

The result is a rapidly growing illegal and haphazard highway signposts and signages that obstruct drivers and pedestrians alike.

Badly affected areas are the Tetteh Quarshie-Adentan route (N4), the Kawukudi Junction, the 37 Military Hospital Intersection, the Liberation Roundabout, as well as the Accra-Kasoa route.

According to the Ghana Standards Authority (GSS) Specification on Outdoor Advertising, the maximum number of signs to be placed laterally on the same side of the road shall be three and the minimum vertical clearance of each sign shall be 2.5 metres.

The Road Traffic Regulation, 2012, also stipulates that an outdoor advertising sign placed on a road or related facility shall be placed in a manner that does not interfere or obscure a traffic sign, device or signal to render the use of the road or facility unsafe to a motorist or pedestrian.

In July this year, the Advertising Association of Ghana (AAG), in collaboration with the Greater Accra Regional Coordinating Council, organised a training workshop for members of the Technical Committee on Outdoor Advertising of the various assemblies in Accra to sensitise them to the standards and regulations.

However, this training has not yielded any results, as the assemblies continue to sit on the fence while these unauthorised billboards pose threats to motorists.

Billboards cluttered along the Kawukudi Highway

In an interview with the Executive Director of the AGG, Mr Francis Dadzie, he indicated that the situation had rendered the streets unsafe for both drivers and pedestrians.

He recounted that the association, had, on several occasions liaised with the authorities to enforce the laws, however, the assemblies continue to connive with businesses and other reputable brands to flout the regulations.

In some situations, he said, the individuals who mounted the billboards did not have the technical expertise on signage placement and ended up causing havoc on the roads.

“Advertising is a regulated profession because when you allow uninformed people to enter into that space, it becomes a recipe for disaster and that is the challenge we have in this country,” he stressed.

The lawlessness, he noted, was at its peak during election campaign seasons.

“It becomes a free for all during that period, political elite who are supposed to know better begin to place their billboards anywhere,” he said.

In order to address the challenge, he said, the assemblies must enforce all the regulations on outdoor advertising without any fear or favour.

Anything less, he said, would ensure that the billboards continue to clutter the streets and pose a danger to road safety.

For his part, the Greater Accra Regional Minister, Mr Henry Quartey, said the RCC would soon set up a task force with members drawn from all the 29 assemblies in the region to collaborate with the AAG to clamp down on all illegal billboards and signposts.

He said there had been some suggestions that all billboards in the region must be given a digital address system so that it would be easy to identify illegal billboards.

For that reason, he said, GARCC was working hand-in-hand with the Ministry of Roads and Highways on the initiative.