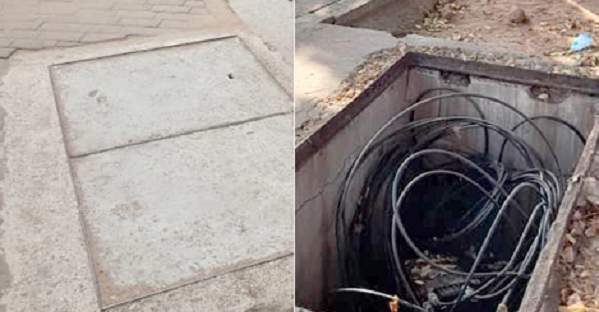 For seven years, Mr Peter Daris, a physically challenged person, has been in a wheelchair begging for alms on some streets of Accra, where the safety of pedestrians is often compromised.

The presence of many uncovered life-threatening underground cable access chambers of telecommunication and utility companies, as well as open drains in the middle of walkways and the shoulders of streets, make his movement in the city a daily risk.

The 52-year-old father of seven faces the danger of tumbling into an open chamber and getting stuck, or being hit by a vehicle as he rides in his rickety wheelchair from the Central Mosque at Tudu in Accra to the traffic intersection near the National Theatre and the World Trade Centre to beg for alms each day.

He recounted how he once fell badly into a four feet open underground chamber while riding along a walkway near the Central Mosque in April 2020.

“I just fell helplessly into the chamber, but luckily people came to help me out. I sustained injuries but I was worried about my wheelchair on which I had to spend GH¢30 to repair,” he said.

Living in fear of falling again into another exposed chamber, Mr Daris said, “I always have to crawl out of my wheelchair, drag my buttocks on the ground and push my wheelchair to a safer place whenever I come across an open chamber in narrow walkways,” he told the Daily Graphic on June 2, 2021.

Prior to begging, he had fallen ill that resulted in his paralysis.

The risk Mr Daris faces in surviving on the streets is no different from what other physically challenged persons and pedestrians also endure daily due to the number of uncovered underground chambers and drains on pedestrian walkways in the city.

For Mrs Comfort Baidoo, the Programmes Officer of the Ministry of Gender, Children and Social Protection, the sight of walkways with uncovered chambers and drains is a nightmare.

At 8 p.m. on June 19, 2018, she fell into one of the uncovered drains close to Databank along the Barnes Road after she had closed from choir practice at the Adabraka Calvary Methodist Church. She broke her right leg — the fibula and tibia — causing her pains she described as the “most excruciating in my life”.

She was rushed to the Greater Accra Regional Hospital, Ridge, where she spent all her life savings and investment of GH¢25,000 to undergo surgery for two pieces of metal to be inserted into her leg to repair the fractured bones.

“As a civil servant, it took a number of years to gather that investment, but it has taken just a few months to wipe it away. Right now, with metal plates in my leg, I am unable to go to the office early and I can’t go places I used to go because when the pains become too much, I have to stay indoors,” she told the Daily Graphic.

A 2018 study conducted under the World Health Organisation (WHO) Accra Integrated Transport Health Impact Modelling to determine the health impacts of changes in travel patterns in the Greater Accra Metropolitan Area established that about 53.9 per cent of the people commuted daily by walking, recommending that safety on walkways and roads should remain essential for the public.

Today, Vodafone Ghana (VG) has embarked on an exercise to cover all its open underground chambers. Currently, the company has covered 200 of such chambers in the capital.

Some of the areas where the chambers had been covered are the central business district (CBD) of Accra, particularly near the Bank of Ghana, the Opeibea Junction, Kaneshie, the Tema Station, Odorkor, Dome CFC Estate, Madina, Achimota Old Station, the Police Training School, Avenor, West Ridge, the Kwame Nkrumah Circle, Adabraka and the National Theatre.

The rest are the Ministries, Tesano, Lapaz, Pig Farm, Osu, the University of Ghana, Legon, Airport Junction, Madina, Asylum Down, Taifa, Mamprobi, Kokomlemle, Nungua, Mallam and some communities in Tema.

The exercise, which began in December 2020 and is currently ongoing, followed a story published by the Daily Graphic titled: “Deathtraps: Uncovered underground chambers pose danger”, in its November 12, 2020 edition.

The publication highlighted the dangers the open chambers, embossed with GT or P&T inscriptions with no barricades or warning signs around them, posed to both motorists and pedestrians, especially women, children and the physically challenged persons, particularly at night and during heavy downpours when some of these chambers became submerged. The Daily Graphic led the company to about 26 open chambers in the city.

Briefing the Daily Graphic on the exercise, the External Communications Manager of Vodafone Ghana, Mr Daniel Asiedu, said public safety remained a priority to the company.

“We are now taking proactive steps to barricade open chambers with safety barriers immediately it is brought to our attention. We are now covering them with concrete covers,” Mr Asiedu said.