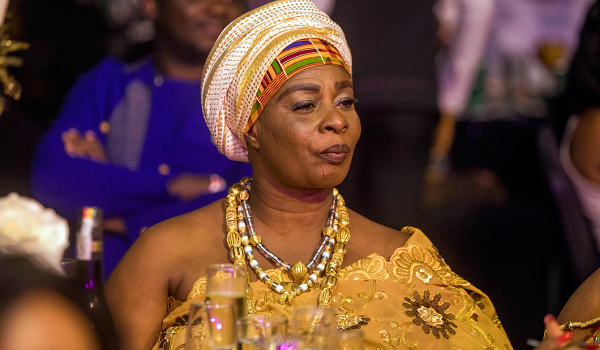 In 2006 when, at the Banquet Hall of the State House, Nana Adwoa Awindor was called up from the gathering to pick up the most prestigious award as ‘CIMG Marketing Woman of the Year’, the walk from her seat into the bright stage lights was like a million miles.

Every step recalled a memory, mostly pain. She thought of her supporting husband, Jim, himself a film guru, who had had to cuddle the pillows in the middle of the night, alone in bed, while she was away in ice-cold Europe and America filming episodes of the award winning Greetings From Abroad.

So wholesome, so absorbing and so eye-opening was Greetings that from 1998 when it hit the screens on GTV, through 2008 when it took a break, it was the programme with the most eyeballs.

Then, suddenly, without notice, it ended. After 10 years, Nana explains, “we felt the programme deserved a rest for a few months.”

The “few months” has turned into 14 agonising years. In 2010, the devastating Adabraka floods struck, dashing all her dreams. Hours of heavy rains flooded the offices of Premier Productions around the Kwame Nkrumah Circle and carried away everything.

“We were selling expensive, state-of the-art cameras and accessories, sound, lighting and editing equipment. The flood waters took everything away. We were on our Ground Zero.”

The success of Greetings was not only the quality of production and the entertainment value; its significance lay both in the bridge it built between Ghana and the diaspora and its ability to unearth Ghanaian brains abroad.

“We interviewed notable Ghanaians, people doing great things in Europe and North America but weren’t so well known by their compatriots back home”.
Greetings also fed Ghanaians with the harrowing experiences of compatriots who had gone through the deserts or hidden in dangerous parts of ships.

What Ghanaians at home saw on TV here was only 30 per cent of what Premier Productions actually did on those trips abroad. Narrates: “We became ‘Come-backhome’ advocates.

We used our presence at Ghanaian durbars overseas to encourage them to try to meet the needs of their villages back home. We went preaching, you know, reversing brain drain into a brain-gain.”

But it was not all smiles. In 2008 (the first year) as Nana sat smiling on the screen greeting Ghanaians from abroad, she was doing so with rented equipment and a burst of goodwill.

Over there in those European capitals and American states, she and the crew were sleeping in couches and on rugs in the living rooms of sympathetic Ghanaians and surviving on semolina, hot dogs, chicken and chips!

Her children, Fara-Fauzia Awindor, now known by her professional name, Efya (yes, the popular musical diva) and the two boys — Fara Faraid Awindor and La’aun Fara Awindor — were born in the middle of it all. Indeed, she recalls, “Fara was breastfeeding when I started Greetings, We had to carry him along everywhere”.

At home, however, honour continued to pour upon her. In November 2010 the chiefs and people of Afi gya Kwabre Sekyere District in the Asante kingdom enstooled her Nkosuohemaa with the stool name, Nana Adwoa Nkyaa.

There are three qualities that will not be lost on anyone who gets close to Adwoa. One: she is gifted with the ability to organise people around her.

Within a year or so after accepting the traditional title, she set herself the goal of strengthening the organisation of the Afi gya-Kwabre Queen mothers Association into a development-oriented body of female royals.

Having done that she turned her attention to Ghana as a whole, a personal dream that has led to the formation of the Ghana National Union of Queenmothers.

Today, her constituency is Africa. In 2013, she was instrumental in the formation of the African Queens and Women Cultural Leaders’ Network (AQWCLN), a body of queenmothers, wives and mothers of Sheikhs, chiefs and princes, and women who go by the title of Magajiya.

Nana was the first Executive Board President. You wouldn’t stay around Adwoa Awindor too long to notice the other side of her – actually the real side of her. Give her an apple and she will give you a jar of marmalade; give her an ‘e’ and she will hand you back an “eel”.

Give her tomatoes and pepper and she will cook you a sumptuous meal. Where does all the energy come from? She herself calls it “the creative juices”.

Once they get pumping, nothing stops her. For the record, Adwoa Awindor is Ghana’s first professional camera woman. For a number of years, she taught Editing at NAFTI.

As a film director, when she calls the shots, every frame of photography is an eye pleasing composition.