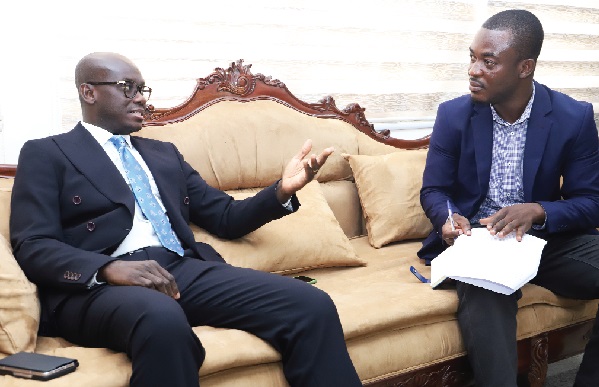 It is the third year of President Nana Addo Dankwa Akufo-Addo’s second term in office. The Daily Graphic is, therefore, conducting a series of interviews with some of his appointees, especially Ministers of State, to highlight their achievements and challenges in their sectors. The Office of the Attorney-General (A-G) and Ministry of Justice is one of the most critical areas of governance, with its work having a great impact on the citizenry and the government.

Our Senior Reporter, Emmanuel Ebo Hawkson, who covers the judiciary and legal issues, had the privilege of interviewing the Honourable Attorney –General and Minister of Justice, Godfred Yeboah Dame, in his office on January 17, 2023. The interview touched on the mandate of the A-G, the reforms he had undertaken to improve justice delivery in the country, as well as the challenges faced by his outfit and how he was addressing them. We bring you excerpts from the interview and for the purpose of this interv

EH: Honourable, your office is at the heart of governance; kindly explain the mandate of the Attorney-General or the Legal Service and its importance.

EEH: You admitted during your vetting in Parliament that one of the biggest challenges facing your outfit was inadequate human resource. In fact, you indicated that the country had about 250 state attorneys which you said was about the entire lawyers in a midsize firm in the UK. Has your Ministry recruited new lawyers? Also, how do you intend to progressively increase the number of state attorneys over time and also build their capacity to serve the legal needs of the over 30 million people in this country?

AG: When we came to office in 2017, the number of attorneys were around 200. We now have close to 400 attorneys due to the conscious recruitment we have embarked upon. My predecessor, Gloria Akuffo recruited about 70 attorneys. In 2021, I recruited 70 attorneys and in 2022, another 70 attorneys were also recruited.
Apart from that , we have ensured that there is systematic training of the attorneys and continuous education for them. We have struck partnership with reputable law firms abroad to undertake training in specialised skills such as arbitration.
It is quite remarkable that in the past few years, the number of arbitration cases that we have had abroad, most of them were conducted by attorneys from this ministry. That constitutes significant improvement in the capacity of the Office of the Attorney –General.
As for the defence of cases in this country, we have been doing that with excellence.
I want to build a legal service that is properly equipped both materially and intellectually. I am not saying that we have succeeded in doing that thoroughly or wholly, we are on the path to do so.
This year, we have sought financial clearance for the recruitment of 50 more attorneys. I am sure that the Ministry of Finance in spite of the prohibition on employment will grant us that request in view of the materiality of the service we render.

EEH: In terms of logistics, you recently distributed over 90 vehicles to the agencies under your ministry as well as the regional offices. Are there plans to repeat this gesture in the near future? In addition, what are the plans that you have put in place to meet the periodical logistical needs of the agencies under your outfit?

AG: We have acquired more than half the number of vehicles that the office had. Until last year, the law reform commission had one vehicle, Legal Aid had about 4 or so. All the agencies under the ministry had such challenges.
When I came to the office, I made a special appeal to Cabinet that the state of affairs of the ministry was so deplorable and clearly constituted an inhibition in the discharge of our mandate. Cabinet approved the release of funds. Out of that, 91 vehicles were acquired. They were spread to the various agencies and regional offices across the country. Apart from the vehicles, we have also ensured that all the agencies and regional offices have a fair share of the required equipment that they need to function efficiently.

EEH: The Law House which is meant to resolve the office space challenge that has bedevilled your ministry stalled for over 15 years before you pumped some life into it when you took office. You have consistently said that works on the project would be completed before the tenure of this government ends. Do you still stand by this timeline? Will the Law House be ready by the end of December this year? Again, do you have plans in place to also improve or enlarge the office space of your regional offices and agencies since they are also bedevilled by the same challenge?

AG: Until 2021, the state of completion of the Law House was just about 30 per cent. This was a project that was commenced at the time of Akufo-Addo as Attorney-General in 2001. The actual construction started in 2003, but quite deplorably as at 2021, only 30 per cent of the work had been done.

EEH: You have consistently hammered on the need to ruthlessly deal with tax evasion and other economic crimes which shortchange the country and the general public leading to drastic loss of money. How far have you gone with this fight and what are some of the interventions your outfit and agencies have introduced to deal with these menace?

AG: We have collaborated with the Ghana Revenue Authority (GRA) and had meetings with them, especially with respect to companies operating in the extractive industry. For example in the mining sector, hundreds of millions of dollars have been retrieved due to this collaboration.

EEH: Honourable, can you give us the specifics of this collaboration between your outfit and the GRA?

AG: Collaboration in terms of examining the files and dockets prepared by the GRA and going through what had been done and enhancing what GRA has made.
Very soon, we will start prosecution and very soon, we will see more prosecution of some of the companies that have refused to comply. The assessment has been made by the record and the criminal division. It is up to them, (companies ) to comply. Usually when those assessments are made, they are given sometime to pay, if they do not pay, we will have recourse under the tax laws and the criminal laws of Ghana to ensure recovery of the money. We want to take it to the extent of prosecution and to the extent that all tax levied against companies are paid.

EEH: Does Ghana have a tax evasion problem?

AG: I think we have a tax evasion problem as a country. Our system of monitoring and even the manner in which accounting is done and the manner in which businesses are not brought or captured within the tax net leads itself to tax evasion. In 2021, I cited the legal profession as one example of industry that tax is actually evaded and I urged lawyers to comply with tax evasion since that is consistent with their oath as lawyers.