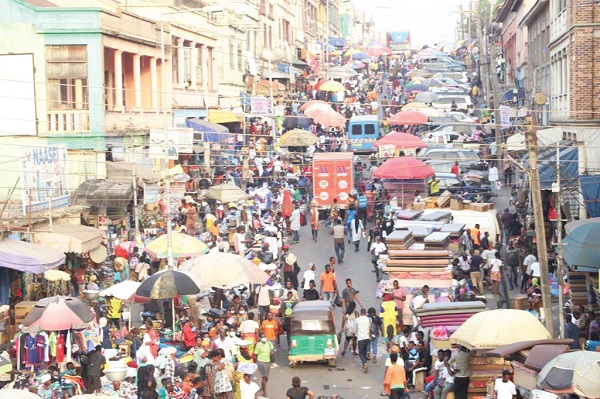 The road from the Kumasi Central Market to Roman has been virtually taken over by trading activities.Pictures: EMMANUEL BAAH
30.5k Shares

The Ashanti Regional capital, Kumasi, has been known for its vibrant commercial activities, and the erstwhile Kumasi Central Market, until it was pulled down to pave way for the second phase of the Kejetia Redevelopment Project, was known to be the biggest market in the sub-region.

Due to its central location, the city attracts lots of visitors on a daily basis and serves as the transit points between the Northern and the Southern, and the Western and Eastern parts of the country.

As a result of the high vehicular and human traffic that pass through the city on a daily basis, coupled with the behaviour of some traders within the Central Business District, city managers have had difficulties managing the congestion in the city over the years.

The problem has been compounded by the ‘haphazard’ erection of commercial structures such as stores and kiosks at unapproved places within the city.

So serious has become the issue that during his new message, Bantamahene Baffour Asare Owusu Amankwatiah VI warned that if the city managers were unable to deal with the situation, “traditional leaders would be forced to step in.”

“In 2023, if they (political leaders) fail to do it, Nananom will take it upon ourselves to make sure Kumasi is clean,” he said.

In an interview with the Daily Graphic, the Mayor of the Kumasi Municipal Assembly, Sam Pyne, admitted that “we all acknowledge that fact that there is congestion within the city, but we have challenges too as we cannot continue to use the old style of decongesting the city.”

He said the current system of decongesting the city by using personnel from the security services to clear the streets was not sustainable.

According to him, it cost money to keep the security service personnel on the streets and as such would not be cost effective to keep using the police and the military to clear the streets.

Mr Pyne said the issue has been compounded with the second phase of the redevelopment of the Kejetia Market, which, he said, has displaced some traders.

Aside from that, he said, the first phase of the project virtually displaced most of the vehicles onto the streets.

Mr Pyne explained that the lorry stations which hitherto were operating at the Ketejia Terminal “are all now operating on the streets, thus making the congestion worse.”

“If you want to decongest using the previous year’s method, it is not sustainable because there is the need for attitudinal change by the people involved and it is also capital intensive,” he said.

In order to find a lasting solution to the perennial congestion of the city, Mr Pyne said the assembly was investing in satellite markets for the people on the streets to move in to.

“That’s why we are seriously looking for an investor or a loan facility to complete the Krofuom market, and the Kejetia Central market is on course.”

According to him, when all these markets become operational, it would push over 90 per cent of the people currently trading on the streets in the Central Business District (CBD) into those markets.

“Planners have something called agglomeration: When you have one business venture, there is the tendency of that venture to attract other business entities.

“So when the Central market is complete, the entire ground floor would be used as a terminal and now the vehicles that are plying all routes would be stationed there and those on the streets trading would go there to do their trading and, therefore, you would not find them on the streets again,” he said.

He was hopeful that when these satellite markets are completed, together with the Central Market, all the vehicles and traders would be moved from the streets to ply their trade at these places.

The other alternative of decongesting the city, according to the mayor, was the development of the Rapid Bus System.

Already, he said there had been extensive technical discussions and collaboration with the World Bank, Agence Française de Développement (AfD) and the French Government for the entire Greater Kumasi.

“If these plans go through, the vehicular traffic would also be reduced,” he said.

Additionally, he said the assembly was seeking a facility from the Internal Municipality Investment Fund (IMIF) to build an ultra-modern car park “to take the smaller cars that park within the CBD as a means of decongesting the city.”

He said there was the need to add a human face to the exercise as most of the people, particularly the drivers, were forced to relocate on the streets as phase one of the Kejetia Redevelopment Project did not have any plans for them.

According to him, when the old Kejetia terminal was operational with all the lorry stations operating from there, there was not much congestion in the city then.

He said the assembly has also engaged the executives of the Ghana Union of Traders Association (GUTA) to impress on their members to display their wares in the shops and not on the pavement.

He was hopeful that the members would heed to the appeal and comply thus clearing the pavement of some clutter.

Late last year, when the Ashanti Regional Minister, Simon Osei-Mensah, appeared before the Ashanti Regional House of Chiefs, he cited the displacement of the lorry stations from the old Kejetia Terminal as one of the major causes of the congestion in the regional capital.

He believed that when the second phase of the Kejetia Redevelopment Project was completed, it would pave way for all the vehicles using the roads as their stations to move from the road, thus, creating space for easy flow of traffic.

He explained that because of the challenge posed by the first phase, “the second phase was designed such that the entire down floor would be used as a terminal and all the cars would be moved there,” he assure Nananom.