64 years of independence; the pluses, minuses and the prospects 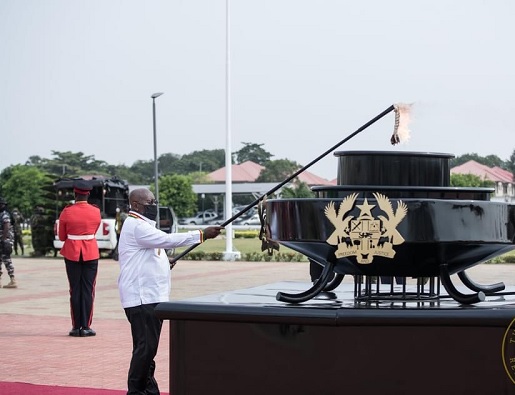 It has been 64 years since Ghana’s first President, Dr Kwame Nkrumah, made the historic “At long last, Ghana is free forever” speech on March 6, 1957 to mark the cutting of the country’s umbilical cord from our British colonial masters.

On that day, the efforts made by key nationalists such as Dr Kwame Nkrumah, Dr Joseph Boakye Danquah, Mr Obetsebi-Lamptey, Mr Ebenezer Ako Adjei, Mr Edward Akuffo Addo, and Mr William Ofori Atta, popularly referred to as the “Big Six” in Ghana’s political history, in the freedom fight paid off as Ghana was declared an independent state.

Since that historic event, annual national events have been held on March 6 to commemorate the liberation struggle and to eulogise those who toiled and laid down their lives to gain independence for the country.

These celebrations are usually marked with pomp and ceremony, including parades across the country mostly involving schoolchildren and the security agencies.

Perhaps, the most glamorous of the celebrations was the 60th anniversary held in 2017 which saw President Nana Addo Dankwa Akufo-Addo inaugurate a 30-member committee under the chairmanship of Mr Ken Amankwah to plan the activities around a GH₵20-million budget.

The 64th independence anniversary will however go down in history as one that was marked without glitz and glamour.

This is against the backdrop that the government had earlier announced the cancellation of the annual independence day parade as part of measures to prevent the spread of the Coronavirus disease (COVID-19) which continues to wreak havoc across the world.

Reflection
As we observe this historic feat from our homes, it is important to reflect on the sacrifices made by our forefathers and the unflinching nationalists’ activities by our great freedom fighters in the journey for liberation from the colonial master.

The fighting spirit of the “Big Six”, backed by solid support from chiefs, students, farmers and fishermen and the ordinary person on the street that led to the attainment of political independence for the country remains indelible.

Aside the annual celebration of this historical milestone, we need to reflect on the gall and glory moments and try to see how far we have come in all spheres of human endeavour, ranging from economic, social, political and other facets of national life.

We should concern ourselves with why Ghana lost her position as the world’s leading exporter of cocoa and struggles to make ends meet in the midst of abundant natural resources such as gold, diamond, bauxite, manganese and hardwood such as mahogany.

Dr Nkrumah’s government embarked on massive road infrastructure projects and completed the Volta Dam project as part of a robust hydro-electrification which created the largest artificial lake on earth.

In the first three decades after independence, Ghana had established itself as a formidable force in Africa, with massive industrialisation initiatives, such as the “operation feed yourself” and “operation feed your industry”, and promoted the concept of domestication.

How far we have sustained these gains is the big question that begs for answers.

The reality that Ghana has not been able to properly harness its abundant natural resources to transform the economy; lost its first spot on the league table of Cocoa production to its West African neighbour, La Cote d’voire; and now battles with erratic power supply, known in the local parlance as “Dumsor,” as it stares us in the face.

Not much has been done to add value to the natural resources, a situation which has kept the country in the periphery of the global economy.
After 64 years of independence, Ghana still turns to the Western world cap in hand, seeking loans to finance the national budget.

These loans come with huge interests and strings that keep the country’s economic umbilical cord tied to the Western world.

While the country is bed-ridden with loans, official corruption in the form of bloated contracts, kickbacks, nepotism, and other well-orchestrated mechanisms to siphon public resources, continue to put the economy on its knees.

The annual Auditor General’s reports have ample examples of such cases.

The educational system is still geared towards making graduates to ask to be given fish, rather than create avenues to fish for themselves.

Successes
Despite these low points, however, the country has chalked up significant successes, especially, in democratic governance.

For almost three decades now, there has been massive improvement in the political environment, unlike in some countries in Africa which are still grappling with military interventions and dictatorial regimes.

After Lt Gen. E.K. Kotoka led the military intervention of February 24, 1966, that abruptly ended the rule of Dr Nkrumah and put a permanent embargo on the first republic, the political history of the country had been punctuated by other military take overs, until the inception of the Fourth republic in 1993.

However, the Fourth republic has seen the country go through eight successive elections and changes in political administration from one party to the other on three different occasions.

Some significant progress has also been made in other aspects of national life, including strengthening of the justice system, expansion of the education infrastructure, as well as contribution of human resource to the world economy.

Ghana’s illustrious son, Mr Kofi Annan was named the United Nation (UN)’s Secretary General in 1996, with Dr Mohammed Ibn Chambas and scores of others putting their leadership qualities to bear in Africa and beyond.

Prospects
The 2010 Population and Housing Census (PHC) showed that more than 60 per cent of the national population is youthful, and with the country’s population now estimated at over 30 million, it means that more than 18 million people fall within the youth bracket.

These statistics give the strongest indication that if the energy of the youth is properly harnessed, the country will be heading for greatness.

It is important to formulate deliberate policies to create employment opportunities for the teeming unemployed youth.

Additionally, Ghana has a huge untapped potential in the agricultural sector which needs to be exploited by rolling out appropriate technology-driven policies and innovations, including improved irrigation systems to ensure all-year-round food production.

The “one village, one dam” initiative rolled out by the government in the five regions of the North to boost food production needs to be refocused and made more relevant to the needs of small-holder farmers.

Another great opportunity for growth lies in the “one district, one factory” (1D1F) initiative by the government. If this policy is decoupled from the usual political talks and is strategically rolled out, Ghana will be on its way to boost its industrial sector.

This initiative has the potential to inspire the process of adding value to the country’s natural resources and create jobs.

Emphasis should be placed on Technical and Vocational Education and Training (TVET) as a measure to train the right human resource that will drive industrialisation policies.

If Ghana must take its rightful place on the path of development, there is the need to create more space for women’s participation in decision making and governance at all levels.

This calls for the strengthening of female-friendly policies, especially the call for affirmative action.