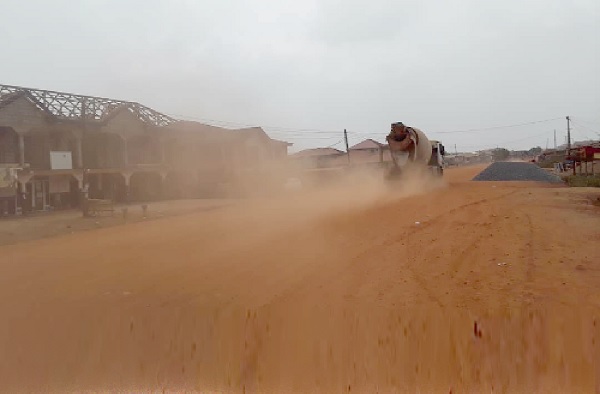 It is a hot sunny afternoon and billows of dust never cease to fill the atmosphere anytime the wind blows or a vehicle passes by at Promiseland, a community near Katamanso in the Greater Accra Region.

Nearly every surface of buildings and shops along the road are covered in dust and the windows illustrate the situation better.

Meanwhile, residents living along the stretch may have to endure all the challenges that come with the unfinished road network in the area until Easter.

The residents have, therefore, called on the government to prevail on the Regimanuel Gray Limited, the contractors of the 10.5-kilometer-road, to ensure that the contractor working on the road executes the project in time in order that the health of residents is not affected.

Experience
During a visit by The Mirror team to the community, the residents complained that the dust was posing a lot of serious health challenges to them.

The storm drain being constructed to ease flooding in the area has stalled.

“I have three children here, and they have all been inhaling this dust. I am worried about their health.”
“We cannot paint our houses because if you do, the dust will take away the beauty. The contractor is not helping us at all. There is a stream here, just come and fetch some of the water and pour it on the road too, that one too the contractor has refused to do so,” a resident, Mr Gabriel Bothway, a worried resident told The Mirror.

Meanwhile, a coconut seller, Isaac, had decided to constantly pour water on sections of the road to reduce the dust, especially where he plies his trade.

A trader, Mr Richard Nannor, narrated his experience in the area. He said it had been bad due to the dust “which settles on my goods and the entire storey building”.

“You sweep your room then in less than no time, the place will be filled with dust again. This is really worrying us,” another resident said.

Noise pollution
One of the residents, Alhaji Sadick Braimah, a retiree, said that there was also a lot of noise pollution in the area.

He said some of the residents had complained many times to the Tema Office of the Environmental Protection Authority (EPA) about the situation, but nothing had been done about it.

“There is also noise pollution emanating from the numerous erected bullhorns on tall posts which blare out loud sounds to disturb members of the community,” he said. 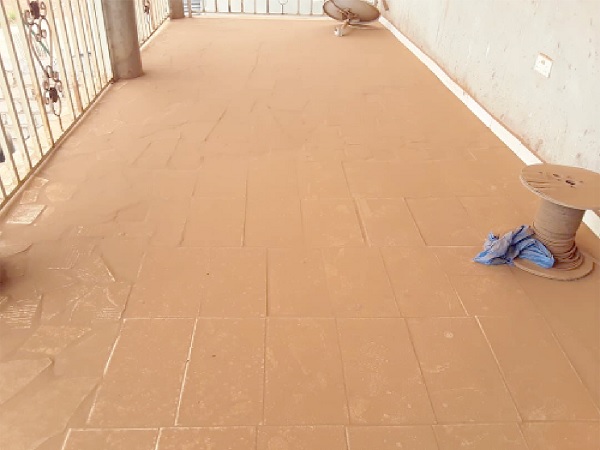 Nearly every surface of buildings and shops along the road are covered in dust.

Additionally, Alhaji Braimah said the area easily floods due to the lack of culverts and drains, causing erosion as well.

Lack of unity
In an interview, a Unit Committee Member of the Kpong Katamanso Pinka Electoral Area, Mr Peter Tetteh, said the residents were not united in their fight for redress.

“You call meetings here and they refuse to attend because everyone claims they are busy. So we are not able to face the appropriate authorities to put forward our grievances before them for redress, and that is worrying,” he explained.

Solution
Responding to the concerns of the residents, the Resident Engineer on site, Mr Ben Kusi Adoma, said he sympathised with them.

In the meantime, Mr Adoma, who is also with the Department of Urban Roads said he would ensure that the engineer watered the dusty road frequently.

Alhaji Sadick Braimah pointing to a drain under construction which overflows anytime it rains.

He said culverts and storm drains were being constructed before the final work could be completed.

“Even though this is a short-term solution, we hope to finish the culverts and drains early enough and put the bitumen on the road by Easter,” he added.