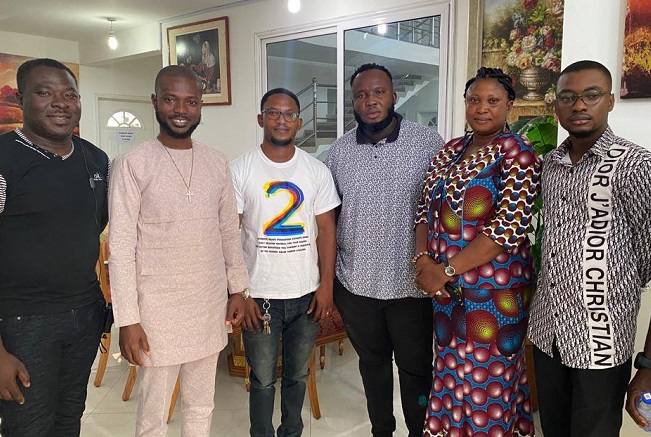 After rendering a public apology on radio, Afrobeats artiste Yaw Berk has followed up in person to apologise to his former manager Kaywa for lying against him.

Yaw Berk was part of a group of artistes including Krymi and Mr Drew, who were signed on to sound engineer Kaywa's Highly Spiritual label in 2018.

However, after he left the label in 2019, he made certain accusations including that he was not managed well with only two of his songs released in the time he was with the label.

He also claimed that the studio where they recorded was infested with bed bugs.

However, in January this year, he rendered an apology to Kaywa on Hitz FM saying all his accusations were false.

He claimed that he had been manipulated by some industry persons into saying the things he did in exchange for a career boost which did not happen.

Although Kaywa also said on the same station that he had forgiven Yaw Berk, the young artiste and his family followed up last Saturday, February 13, to meet Kaywa and show how remorseful he is.

The short ceremony, which took place at the office of Rev. Danso Abbeam in Kasoa in the Central Region, saw Yaw Berk going on his knees to apologise to Kaywa for disrespecting him.

Kaywa, who was initially angry with Yaw Berk, said he had forgiven him and asked that whatever took place should not repeat itself.

Rev. Danso Abbeam, who introduced Yaw Berk to Kaywa thanked the two parties for making peace and prayed for them.

“I had to come in because the disrespect from Yaw Berk to Kaywa should not have happened. Although Yaw Berk had apologised to Kaywa on Hitz FM and other platforms, I wanted Yaw Berk to meet him ask forgiveness," Rev. Danso Abbeam said.