The Art of Healing documentary premiered in Accra 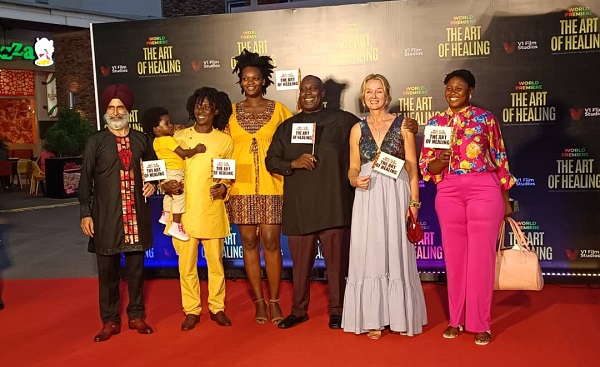 The Art of Healing documentary premiered in Accra
30.5k Shares

The Art of Healing, a feature documentary that tells the story of transatlantic trade from the Ghanaian perspective, has premiered.

The documentary, which was inspired by the works of Ghanaian sculptor Kwame Akoto-Bamfo, premiered at Silverbird Cinemas in Accra last Sunday, with some attendees from the diaspora and some top personalities gracing the occasion.

The feature documentary themed: "Finding Freedom from the Descendant Pain of Slavery" is a production of V1 Film Studios with Mr. Amar Deep Singh Hari as the Executive Producer and was directed by Yaw Pare and Darius Matheson.

According to Akoto-Bamfo, these installations at his museum represent captive Africans who were abducted and sold forcibly during the transatlantic slave trade.


"The healing from the trauma of the slave trade has not been fully addressed by us. So on my journey in trying to find myself as an African and Ghanaian, I came across all forms of trauma in people and that is why I saw the need to do this documentary so that Africans can heal and move forward, especially considering our dark history," he told pressmen at the documentary premiere.

He added: "The Nkyinkyim museum is a creative space that seeks to contribute to telling our story, and it has over the years incorporated our understanding of what it means to promote and preserve our intangible cultural heritage."

The documentary details the shock, horror, distress, and anger that occurred during the peak of the transatlantic slave trade and also recalls how the slavery phenomenon started.

Mr Yaw Pare, a co-director of the documentary, was elated with the massive turnout of the premiere and stated the commitment of his outfit to make more of such a series.

"This documentary is the beginning of creating a dialogue between the diaspora and also bridging the communication gap so that we can both understand each other about the real happenings of slavery so that we can move forward," he said.

The feature documentary is expected to be made available on Netflix in the coming weeks.