A NIGERIAN classical musician, Olumide Bartione stole the show with his baritone voice when he performed at the Laudate Pentecosten Live Musical Concert held at the St Theresa’s Catholic Church in Kumasi.

It was a night flooded with spirit-filled worship and praises coupled with beautiful angelic voices as individuals and choirs took to the stage to put up their best performance.

With his baritone voice, just as his name suggests, Olumide Baritone who was a special guest at the event put up an amazing performance with the Catholic Philharmonic Choir to the admiration of those who graced the occasion.

He also did a rendition of Twi song Adom Noa which was originally composed by James Varrick Armah, together with the host choir to the admiration of patrons.

Some of the other songs he performed with the Catholic Philharmonic Choir included Hail this Joyful Day, Sweet Spirit, Come Down O Love, Hosanna in the Highest and a host of others. 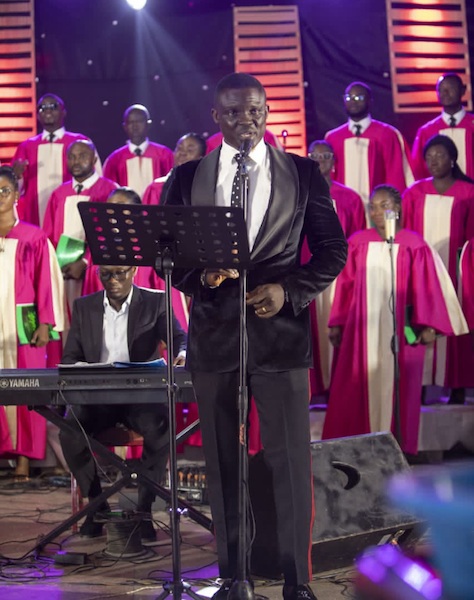 Born Olumide Dada from Ogun State in Nigeria, Olumide Baritone graduated from the University of Lagos with a degree in Actuarial Science and Insurance and could be described as an artiste with a difference and a voice that smoothens the soul.

In an interview prior to the concert, Olumide Baritone described himself as an up and coming classical soloist who learnt from the best and was ready to impact this generation internationally.

“Unlike most musicians, I discovered my singing talent very late in life as an adult and grew rapidly through the best music teachers in Nigeria.”

Olumide Baritone describes himself as a professional baritone soloist who has performed at many events. He aspires to become one of the best classical and Broadway artistes so he rubs shoulders with the best in the world.

The Pentecosten Live Musical Concert was organised by the Catholic Philharmonic Choir as part of activities to mark the Feast of Pentecost at St Theresa’s Catholic Church at Asawase in the Archdiocese of Kumasi.

The Feast of Pentecost is celebrated in the Catholic Church to mark the beginning of the universal Church.

The programme attracted singing groups and individuals from within and outside Kumasi and Ghana.

Some of the groups in attendance included St. Theresa’s Youth Choir, Glorlious Symphony Ghana, St Theresa’s Guild and Choir, among others.