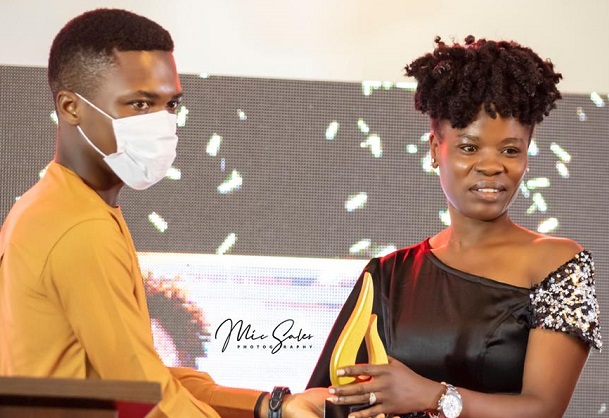 WHILE the year 2020 has been one to forget for the world because of the coronavirus pandemic but some people have been thriving in the midst of it all and one of them is radio presenter Ohemaa Woyeje.

She celebrated her daughter’s first birthday with all pomp, marked her first year working with Angel FM and in September she was awarded the Most Authentic Voice on Radio at the Pan-African Heroes Honours.

Last Friday, October 16, Ohemaa Woyeje added another feather to her cap when she won the Woman Radio Personality at the Ghana Outstanding Women Awards (GOWA), held at the Alisa Hotel.

GOWA, which is organised by ASKOF Productions, is aimed at celebrating outstanding women who are impacting their communities, country and even beyond.

In an interview with Graphic Showbiz, Ohemaa Woyeje, who could not hide excitement, said she felt vindicated by the award because she had had challenges.

“I feel great and obviously honoured. I also feel vindicated that a determined person can succeed, it doesn’t matter the platform one is given, if one puts one in his/her best efforts, he or she can get to the top.

“The challenges will come but if you’re determined, there’s nothing that can stop you,” she said.

Asked what she was doing to help other women get to higher heights, she said, “I will just continue with the liberation vibes on air to inspire them. I want to urge women to work hard to prove their worth, not only to society but to themselves.”

Aside from radio, Ohemaa Woyeje runs a number of businesses including Ohemaa Woyeje Ice Bar. She said it was not easy juggling a radio career, motherhood and running businesses but she was managing it.

“It’s not easy but with the support of my mom, it is going well. Also, because my marriage is long distance, I find things easy. Sometimes it feels as if I am a single woman although I am married,” she explained.

For those who want to be like her, Ohemaa Woyeje had some advice. “Embrace negativity as a challenge so you can succeed.”

Other winners were actresses Nana Ama McBrown who took home the Woman Brand Influencer, Gloria Osei Sarfo who won Woman In Film and Empress Gifty who was adjudged Woman In Music.