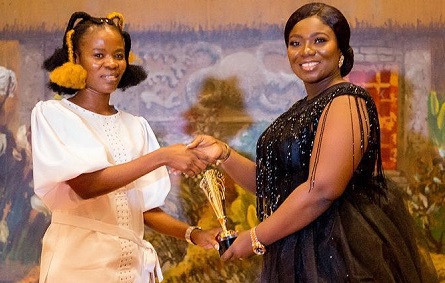 Radio presenter Ohemaa Woyeje has a lot of reasons to celebrate; not only is she marking a year since she made the move to Accra-based Angel FM, but she also grabbed an award at this year’s Pan-African Heroes Honours held recently.

Ohemaa Woyeje was awarded with the Most Authentic Voice on Radio trophy at the event, which came off at the Accra International Conference Centre on Saturday, September 26.

The event was jointly held by the Pan-African Heroes Foundation (PAHF), the Rectitude International Mission (RIM) and the Bureau of Research on Governance, Commerce and Administration (BORGCA).

Speaking with Graphic Showbiz, Ohemaa Woyeje, who currently hosts the mid-morning show Yadwuma Nie on Angel FM said she was excited at the honour done her. “It feels great, without a doubt it feels good to be recognised for the work we do. It’s not always easy so such awards encourage and motivate us to do more,” she said.

On what could have won her the award, she said, “it is probably the consistency in putting out well researched authentic content for the listeners and the dynamic variations each day of the week.”

Last year, Ohemaa Woyeje caused a stir when she quit Adom FM where she had worked for seven years as the presenter of the mid-morning show Work and Happiness over what she said was unfair treatment on the part of her bosses.

After taking a break to spend time with family and grow her other businesses, she announced that she was joining Angel FM to again host the mid-morning show.

A year on, Ohemaa Woyeje told Graphic Showbiz that she made the best decision to join the station, which is part of the bigger Angel Broadcasting Network.

“It’s been the best so far. The freedom to continue to be creative, naming the programme myself, creating every single segment of the show on my own, introducing a lot of fun segments and doing a lot of charity work has been massive.

“Also the flexibility of being able to travel and host the show from Europe and transmitted in Ghana for a couple of weeks was lit. I have no regrets at all.

“I realised that others had to join Angel FM because probably they were inspired by some of us that they can make it even without jumping on an already existing huge media network! It actually depends on what you bring to the table,” she said.

On what she intends to do to ensure her show stays competitive, Ohemaa Woyeje she would remain authentic and original.

“I have already introduced segments the listeners love according to feedback, one of which is the Thursday show where I invite guests to rather host the show while I DJ for them among other things and we can only improve on our winning formula,” she said.

Other notable persons who were honoured at the Pan-African Heroes Honours include Stacy Amoateng, Executive Director of Angel Broadcasting Network, who was adjudged Most Outstanding Female Personality.