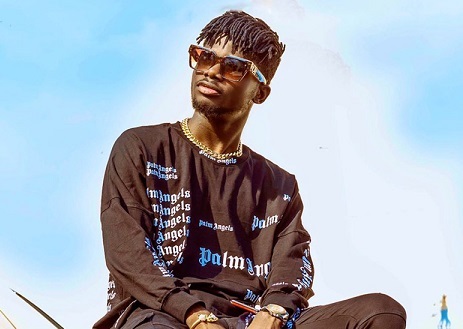 Despite the largely negative reaction to his Artiste of the Year win at the Vodafone Ghana Music Awards (VGMA), Highlife artiste Kuami Eugene says he is not bothered.

Kuami Eugene was crowned Artiste of the Year on Saturday, August 29, at an event at the Grand Arena of the Accra International Conference Centre beating Sarkodie, Diana Antwi Hamilton, Kofi Kinaata and Medikal and according to him, he fully deserved the award.

“I disagree with anyone who says I don’t deserve the Artiste of the Year award. I deserve it 100 per cent. Why would I be in the category if I didn’t deserve it?

"Would anyone have said Kofi Kinaata or Sarkodie did not deserve it if they had won. Ghanaians should stop it. Anyway, everyone is entitled to their opinion and have the right to express it but I am not bothered by that,” he told Andy Dosty on Hitz FM on Monday morning.

At last year's edition of the VGMA, Kuami Eugene was an Artiste of the Year nominee and according to him, he was very disappointed when he didn't win because of the fight between the camps of Shatta Wale and Stonebwoy.

“Everyone was behind me to win Artiste of the Year last year but that did not happen due to two individuals who had their own issues.

"I should have won that award but because of the two artistes who had their own issues everyone else has to go home because of them. I will not sit here and lie that I was not hurt. I was hurt and highly disappointed in whatever happened that night," he said.

Since bursting onto the scene in 2017 with his hit song, Angela, Kuami Eugene has been consistent, releasing tracks such as Confusion, Ohemaa, Aku Shika, Obiaato, Turn Up among others.

He has come across as one of the mentally strong artistes in the Ghanaian music industry who despite the trolling he receives on social media, remains focused.