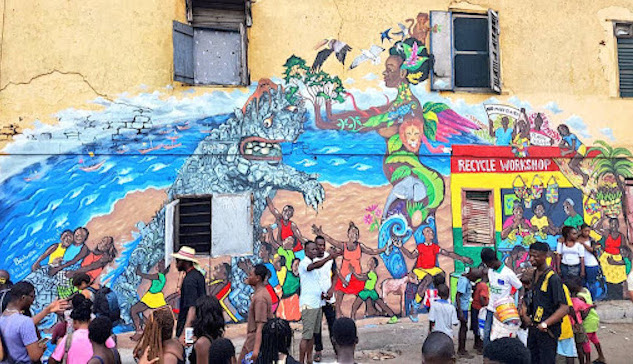 Four of the organisers of the Chale Wote Arts Festival have been arrested and granted bail by the Accra Regional Police Command for allegedly breaching the public order law.

Those arrested are the curator of the popular street art festival, Mr Mantse Aryeequaye and three other organisers, Nii Ayeh, Ampem Darko and Evans Abio.

They were arrested last Saturday (August 21, 2021) outside the Usher Fort, James Town while they were setting up for an outdoor event.

After holding them in the custody of the Accra Central Police the police granted them bail last Monday.

Virtual event
Contrary to the previous event that is associated with a large crowd the Accra Metropolitan Assembly (AMA) announced that it had agreed with the organisers of the Chale Wote Festival to hold this year’s edition of the annual street art festival virtually. The event was scheduled for August 13 to 21, 2021.

The AMA explained that the arrangement was due to the surge in the COVID-19 cases and in compliance with the President’s 26th update on the COVID-19 protocols for people to avoid large gatherings to prevent the spread of the Coronavirus.

Later, the organisers of the festival issued a statement challenging the decision by the AMA to hold the event virtually.

However, the CEO of the Accra Metropolitan Assembly (AMA), Mohammed Nii Adjei Sowah, has said the decision to advise organisers of the Chale Wote Festival to hold a virtual event was to protect lives amidst a recent spike in COVID-19 deaths.

Bail
The Public Relations Officer (PRO) of the Accra Regional Police Command, Deputy Superintendent of Police (DSP) Ms Juliana Obeng who confirmed the arrest said the four persons were arrested after the police picked up intelligence about the organisers holding an outdoor event without police permit.

She said in line with the Public Order Act (1994) any person who desires to hold any special event in any public place is required to notify the police in not less than five days before the date of the special event.

The section on the interpretation of the Act defines a special event as procession, parade, carnival, street dance, celebration of traditional custom, outdooring of traditional ruler, demonstration, public meeting and similar event.

Ms Obeng said the four persons have since been granted police enquiry bail and are required to report at the Accra Central Police station every day while investigations continue.

Chale Wote Street Art Festival which started in 2011 is an alternative platform that brings art, music, dance and performance out into the streets.