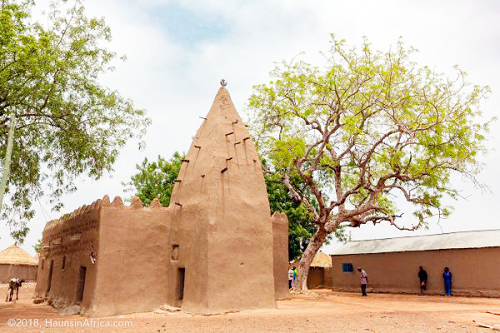 Wuriyanga, a farming community in the Tempane District in the Upper East Region, is arguably one of the unique communities in the country. This is because it is home to an ancient mud mosque built about 200 years ago and a tall mysterious tree beside the mosque as old as the structure itself.

They are both located about 107 kilometres from Bolgatanga, the regional capital.

Although no specific date has been given or recorded, it is believed two centuries ago, an Islamic Leader and a Mossi by tribe, Imam Shehu Ahmed, who built the mud mosque, migrated from Burkina Faso and settled in the community.

He built the mosque purposely to help propagate the Islamic religion and to ensure that the teachings of the Quran was effectively spread among the people. But prior to its completion, the Islamic leader held teachings for the congregation in the open under a scorching sun as there was no tree or shelter to provide shade for the people.

According to oral history, as narrated by a member of the Maintenance Committee of the ancient mosque, Mr Mohammed Imam Hamid, the Islamic Leader, Imam Ahmed, had a walking stick believed to be about 25 years old.

According to the narrator (Hamid), one day, the Islamic leader planted his walking stick in the ground and prayed to Allah for it to grow into a tree to provide a shade for the congregation pending the completion of the mud mosque.

Based on his faith in Allah, the Islamic leader started watering the walking stick. To the surprise of many people in the community, the walking stick started growing into a tall tree beside the mosque, which provided the needed shade for the congregation.

This mysterious tree has a local name in the Mossi language known as “Norbega".

Till date, no one is allowed to prune the tree because the narrator explained that the tree had been shedding off its leaves, as well as its weak branches on its own. All the successors to the Islamic leader have over the years ensured that the tree is never cut down.

“No one has ever touched this tree because it prunes itself; and that is the walking stick of Imam Ahmed, the first person to build this ancient mosque,” the narrator further stated.

The current Imam of the mosque, Alhaji Shaban Sheikh Ahmed, and his Deputy, Alhaji Mahamud Sheikh Osman, both octogenarians, shared their experiences with the Daily Graphic.

They, however, stated that they were both born in the community and grew up to see the mosque already built. They said that there were five late Imams who were in charge of the mosque leading prayers.

Alhaji Ahmed further said “we grew up and saw this great mosque and we the current Imams are about 85 years old now; we can only testify to what we have seen and our forebears have done well to maintain this ancient mosque for posterity."

They indicated that there was no literature on the ancient mud mosque except the oral history and stories they were told by their ancestors from generation to generation.

The two Imams and the maintenance committee member all acknowledged that “anybody who comes to this ancient mud mosque with very sincere intention to pray gets whatever he or she wants in life from Allah."

While they were narrating the spiritual significance of visiting the mud mosque, the maintenance committee member brought out some ancient parts of the mosque. They included a white cloth neatly folded and put into a small bag.

The white cloth is used for spiritual prayers which the Imams believe brings rapid results. The two Imams also brought out some old pictures of their forefathers who were Imams and are dead.

Interestingly, three things immediately stand out when you see the Wuriyanga mud Mosque: it is not whitewashed, it only has one tower, and it has no exterior buttresses. There is also no stairwell leading to the roof.

Instead, an opening in the parapet on the west side allows a ladder to be used for roof access. There are also old aluminium roofing sheets tucked into the roofline to ensure that rain water from the roof does not damage the walls. In other places with similar building styles, ceramic pipes are rather used for that purpose. 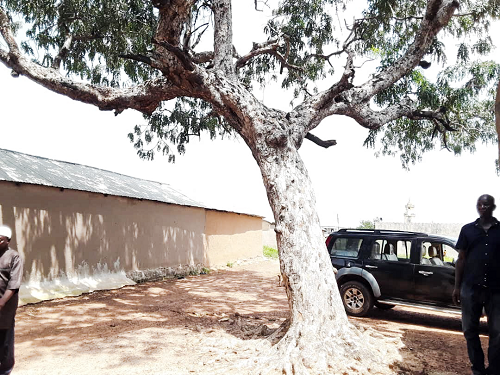 Like other mosques in the Northern and Savannah regions of Ghana, the Wuriyanga Mosque is built in the traditional Djenné architectural style, using local materials and construction techniques.

Djenné is a town and an urban community in the Inland Niger Delta region of central Mali, famous for its Sudanese-style architecture.

Another feature of the mud mosque is that its flat roof is supported by very thick load-bearing walls and many columns on the interior. The building is rectangular in shape.

Some of the materials used in building the mosque include mud, coal tar and sticks from a tree in the coconut family.

Today, the Wuriyanga Ancient Mosque is still standing despite its age and in active use by the community. It can accommodate 150 Muslims at a time for prayers.

It is opened for prayers daily and many Muslims still use animal skins as prayer mats when praying inside the mosque.

For Jum’ah (Friday prayer) and Khutba (sermon) at 1:30 p.m., men gather there to pray and hear the Imam’s Khutba while the women gather in and around the mud mosque.

In the mosque, there are two coffins for burial purposes while there are a number of moulded mud blocks to be used for renovation purposes.

Unfortunately, some cracks are beginning to develop on some parts of the building, particularly around the minaret area (a slender tower, typically part of a mosque, with a balcony from which a muezzin calls Muslims to prayer).

Some of the elders in the community, including the two Imams, have pointed out the need for the old mosque to be preserved. They expressed regret that although a number of tourists and visitors had been trooping to the mosque, little was being done about supporting the community to maintain the mosque for posterity.

Figures made available by the maintenance committee of the mosque indicate that on the average, four tourists visit the mosque annually.

Mr Hamid on behalf of the Muslim community and the two Imams, therefore, appealed to the Ministry of Tourism, Arts and Culture, investors and tourists to help maintain the mud mosque, as a way of developing religious tourism in the area and the country as a whole.

He called for a mausoleum, an Islamic education unit, and expansion of the mud mosque to accommodate more women during prayers.

Furthermore, he appealed for a borehole and toilet facilities to be provided to make the Muslim congregation comfortable whenever they visited the mud mosque for prayers.