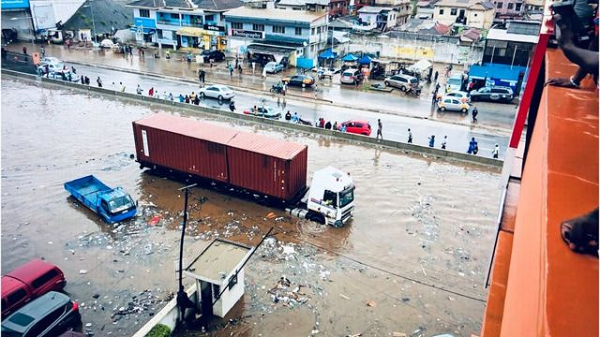 It is a pain to feel that we pay lip-service to solving the perennial problem of floods in our cities and towns, especially Accra.

It is even more painful to observe that it is only when we experience floods that we are seen to be taking steps to address the canker, only for us to relax when the rainy season is over.

This behaviour is not something we must encourage, especially if we are committed to making Accra, and by extension the country, the cleanest city, not only in the subregion but also on the continent.

We are just getting to the rainy season this year, but all indications point to a city not prepared for the rains.

Last Friday, large parts of the capital city were flooded after a mid-morning rainfall. Areas such as the Roxy bus stop, Odawna, the Central Business District, sections of the Achimota-Ofankor road, parts of Kaneshie, Madina and Weija were flooded, with people seeking shelter under buildings and at bus stops, while others were forced to vacate their offices as water gushed through any available space to find its way.

Many roads were also blocked by the flood waters, resulting in heavy vehicular traffic.

This is so disturbing, particularly when we recall incidents of fatalities associated with the menace anytime it rains, the darkest spot being the one experienced on June 3, 2015 when heavy rainfall which started in the late hours on June 2 led to flooding in many parts of the country, with Accra being the worst affected.

The concomitant effect of an accompanying explosion at a fuel station at the Kwame Nkrumah Circle was the death of about 150 people and injury to many others, who still suffer from the effects of the disaster financially, socially and health wise.

An MDPI data shows that majority of flood disasters in the country and the biggest toll on properties and lives are recorded in Accra. The data also estimates total damage of over $600 million, affecting more than five million lives, with many fatalities from 1900 to the first half of 2021.

Some deliberate, conscious drastic action must be taken. The country cannot afford to pump money into rebuilding infrastructure and other properties that become victims of floods that we could have prevented in the first place.

We know one of the key causes of flooding to be the poor flow in drainage networks.

Although drainage projects and other priority drains have impacted lives positively, activities such as indiscriminate littering and dumping of waste in open drains still pose a greater risk of flooding.

As the rainy season approaches, the Daily Graphic would like to urgently appeal to duty bearers – the Greater Accra Regional Coordinating Council, metropolitan, municipal and district assemblies, the Sanitation, Works and Housing ministries and all related stakeholders – to get on board to get their act together and work to ensure that we go through the season without any cause to worry.

The citizenry must also know that for us to live through the rainy season safely and unscathed, they have a responsibility; they must stop littering and the indiscriminate dumping of waste. We must take utmost interest in protecting the environment in every good way possible; after all, it is in our own interest to secure and keep our environment clean and safe.

Anything short of this will not bode well for us and the nation as a whole.

The Daily Graphic is consistently looking forward to a functional city where nobody gets worried because it is going to rain.

It has been done elsewhere; many cities do not come to a halt when it rains. This is because the right systems, infrastructure and attitude are in place to guarantee a working society.

We can all do it if we put our shoulders to the wheel.