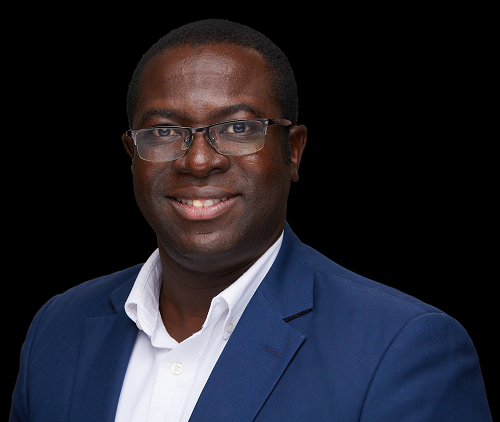 Dr Yaw Perbi is a medical doctor by training and has practised medicine both in Ghana and with the United Nations operation in Cote d’voire. He is a renowned author, publisher, a sought after preacher, inspirational teacher and life coach for scores of emerging leaders around the world.

As an international speaker and award-winning Toastmaster, his audiences have ranged from Pre-teens through Professionals to Presidents in Ghana and over 45 countries on five continents.

Dr Yaw Perbi currently resides in Montreal, Canada with his wife, where he dexterously combines preaching and pastoring with a variety of public speaking engagements, leadership and financial consultancy, and serving as Global CEO of TheHuDGroup with operations in 22 countries. He is a fellow of the Africa

Appearing on Springboard, Your Virtual University, he said the COVID-19 pandemic could be an opportunity for Africa to take a huge leap ahead of the rest of the world.

He said in every generation, something happened that caused a shift and people who fail to make that adjustments were always left behind.

Dr Perbi, therefore, urged Africans to quickly adjust to the new changes in the world as a result of the pandemic and use it as an opportunity to climb up.

“The only reason we are called third world is because at a particular time in history, there were some shifts and we were left behind but with the Post COVID-19 world, this may be the opportunity for us to take a leap,” he stated.

He pointed out that the current digital revolution might be the best opportunity for the continent to become a force on the global world.

“Look at telephony, for example, Africa has one of the highest telephony penetration in the world and the Americans are now talking about mobile money, something Kenya started long ago and Ghana had followed suit.

“We are miles ahead when it comes to things like this so maybe the digital revolution may be our opportunity to be a force on the continent,” he stated.

Dr Perbi noted that all he did had to do with leadership development, whether on campuses, churches, or corporate space.

He said it was, therefore, interesting to see how all campuses and most businesses closed down as a result of COVID.

“Ministry, training and leadership development programmes had to pivot online and although it was supposed to be a negative, it turned out positive because all of a sudden, we got more reach and some students we have been training as leaders who have returned to other countries who we couldn’t physically see all of a sudden appeared online.

“It’s been ministry, training and leadership development without borders,” he explained.

Dr Perbi noted that growing up, there had always been signs that he would end up in the leadership ministry.

He said he was almost not born alive because of a medical complication that threatened his life.

This, he said, made his mother pray to God that if he survived, he would be dedicated to his work.

“Right from birth, that tendency was there and the signs were there right from when I was a child. Responsibilities and leadership kept following me right from school, I acted as Jesus in my school play, was school prefect at various levels and got selected for three international leadership programmes

“When you look at my life, you will think this guy is scattered. I am a medical doctor, I have been in the military, United Nations, education, finance, pastor but what look scattered, when you look through all of it, the common thread is leadership,” he pointed out.

He said he had been a great proponent of authentic leadership which was now a big thing in the corporate space.

“My clarion call has always been about authentic leadership and inter cultural leadership,’ he said.

Opening to the world

Explaining how he got interested in the global world, he said right from Achimota Secondary School, he had the opportunity to go for an exchange programme in the United States which was a good opener to the global world.

He said he later became a World Youth Global Ambassador which was a life changing experience.

“50 young people from 50 different countries and that opened my mind to a lot of things. A young boy at the age of 18 years old with the world opened to me.

My heart expanded and has never been able to shrink again,” he noted.

He said after the programme, he was invited to come back as an intern for the World Youth Vision Ambassador Programme, which opened his eyes to the fact that he was not only good for Ghana but good for the world.

Living outside the country

All this while, he said his passion was to showcase Ghana to the world and did not have any interest in living outside the country.

“I came back, did medicine, completed and started practising and was then asked to go on a United Nations peacekeeping mission to Cote d’voire,” he stated.

After one year in Cote d’voire, he said he joined his wife who was then doing her MA in Canada where they started their ministry.

“Before we realised, we had started training Canadians and sometimes we will travel for nine hours to places and do pastors training and leaders training. Soon, I was pastoring a Chinese church,” he narrated.

Dr Perbi advised Christians that they were made for the world, stating that the global life was the normal Christian life because God was a global God.