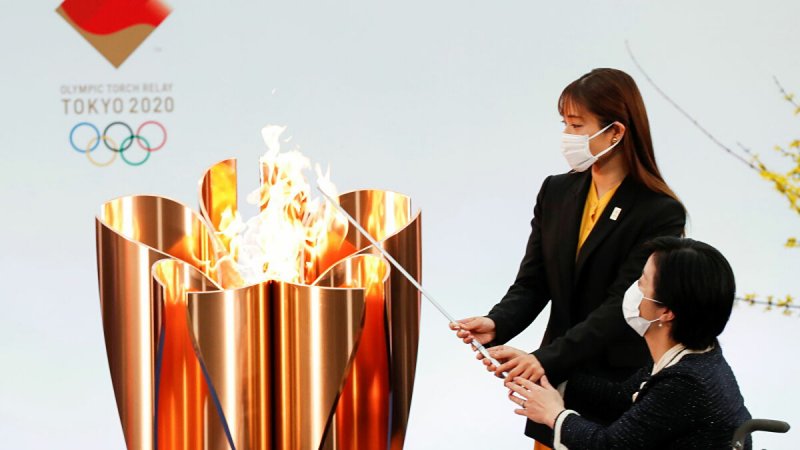 The north-eastern prefecture of Fukushima is the beginning of the relay
30.5k Shares

The long-awaited torch relay for the postponed Tokyo Olympics kicked off in the north-eastern prefecture of Fukushima on Thursday, despite persisting concerns about the Games going ahead amid the coronavirus pandemic.

Strict social distancing measures are in place for the relay, with people encouraged to watch it online and roadside spectators asked to wear masks and refrain from shouting and cheering to reduce the risk of spreading the new coronavirus.

A ceremony was held to mark the relay's start at the J-Village football training centre near the damaged Fukushima Daiichi Nuclear Power Station, the site of Japan's worst-ever atomic disaster 10 years ago.
The place is a symbol of Japan's recovery from the 2011 earthquake and resulting tsunami, which caused a triple meltdown at the plant, Tokyo organizing committee president Seiko Hashimoto said at the event.
The natural disasters left about 18,400 dead or missing in the north-east.
The J-Village training centre served as a key base when Japan was dealing with the nuclear emergency.
“Inspired by the Olympic values of peace and solidarity, the Olympic Torch Relay will carry Tokyo 2020’s message, ‘hope lights our way’, across Japan and the world," International Olympic Committee president Thomas Bach said.
“It will also acknowledge the challenges faced by society since last year, highlighting the importance of unity and solidarity within humankind, showing that we can only become stronger – together.”
The 121-day relay started at the centre as members of Japan's women's football team from 2011, who won the World Cup that year, got the event under way.
"The Olympic flame has been waiting for this moment just like unopened flower buds of cherry trees," Hashimoto said.
"The flame has kept burning silently and strongly during a very difficult period the world has faced for the past year," she said.
The flame arrived in north-eastern Japan a year ago from Greece where it was ignited.
It will be carried in turns by about 10,000 torchbearers across the nation's 47 prefectures. The relay culminates in the lighting of the Olympic cauldron at the opening ceremony of the Tokyo Games on July 23.
"We hope that the torch relay can bring hope, strength, and energy to each destination, embodying the theme of 'Hope Lights Our Way,'" Hashimoto said on Wednesday.
Much of the Japanese public however are not enthusiastic about the torch relay or the Olympics, both due to the coronavirus pandemic and soaring costs for the Games.
A weekend survey conducted by Asahi newspaper showed only 27 per cent of those polled said the Tokyo Olympics and the Paralympics should be staged as scheduled while 69 per cent said the Games should be cancelled or rescheduled.
Some critics think Japan is using the Olympics to downplay the lasting impact of the nuclear disaster. Tens of thousands of people are still unable to return home near the complex due to radiation contamination.
Speaking at a news conference on Wednesday, Hashimoto thanked the torchbearers for their patience after the pandemic forced Japanese organizers and the International Olympic Committee a year ago to delay the Games until this summer.
"I hope you will connect the thoughts and feelings of us all, so that this can become a source of collective power for our society to overcome hardship," she said.
Daily Graphic Newspaper, Graphic Sports Newspaper