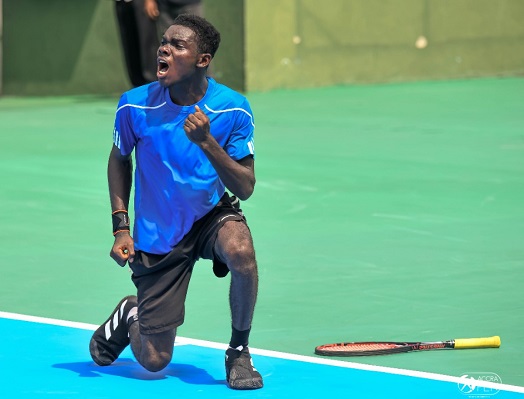 Top seed Japheth Bagerbaseh was beaten in the second round of the ongoing Accra Open as Sakumono Tennis Club’s Samuel Nyamekye advanced with a 7-5,6-7(3), 7-6(7) victory yesterday.

Samuel Nyamekye won the first set breaking Japheth in the eighth game to win 6-4. In the second set, Samuel was unable to end the match after leading 5-2 allowing Japheth to level things up. Japheth went on to win the tie-break 7-6(3).

In the final set, at 6-6 tie break Samuel carved out a single break point opportunity in the game and took the chance to move ahead again before serving out for an impressive win.

"The first set was great, I think he maybe only won one or two points on my serve," he said. "The second set was tougher and in the final set I had to save some break points. Really happy to be through to the quarterfinals," said Samuel Nyamekye.

The event is organized by RT Sports Agency and sponsored by Amoako Boafo with support from Gallery 1957 and Kempinsky Hotel.