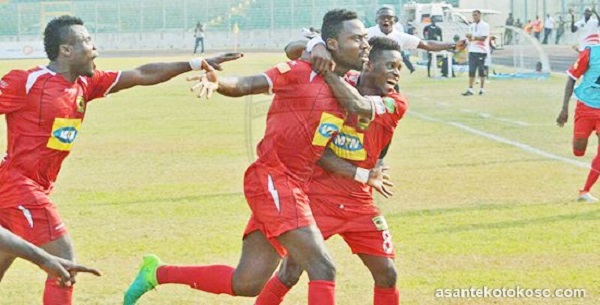 League leaders, Asante Kotoko, will clash with regional rivals, Ashantigold, in a 12th week top liner at the Baba Yara Stadium in Kumasi on Sunday in a bid to tighten their grip at the top of the premiership ladder.

The Porcupine Warriors lead the pack with 23 points, 11 points more than their opponents who are perched on the 14th position with 12 points.

However, Kotoko, who broke the Aduana Stars jinx at the Nana Agyeman Badu I Park at Dormaa-Ahenkro with a 2-0 victory last Sunday, share the top spot with city rivals, King Faisal, but for the luxury of a three-goal advantage.

That is why Coach Prosper Narteh Ogum’s men will fight for a home win to maintain their lead and sink their neighbours further down the table.

Fresh from their impressive 1-0 away victory over the Miners at Obuasi last Sunday, Medeama are tipped to beat Berekum Chelsea at their favourite Akoon Park at Tarkwa on Friday, while Accra Lions host struggling West Africa Football Academy (WAFA) at the Accra Sports Stadium.

The Bibiani Dun’s park will be another hotspot on Sunday when struggling Hearts of Oak descend on Bibiani Goldstars to make amends after drawing goalless at home against Bechem United.

The Nana Fosu Gyeabour Park at Bechem will witness the clash between Bechem United and Real Tamale United, with bottom-placed Elimina Sharks playing host to in-form Aduana Stars at the Nduom Sports Complex.

At the Theatre of Dreams at Dawu, tottering Legon Cities face a tall order playing as guests of Dreams FC.