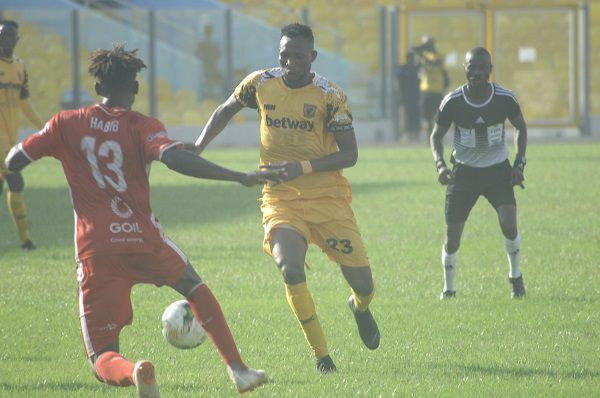 Obuasi-based Ashantigold (Ashgold) yesterday denied Kumasi Asante Kotoko the chance to relish a special double victory in thenation’s capital, by coming from behind to record an emphatic 3-1 win in their semi-final clash in the Tier Two of the Special Competition played at the Accra Stadium.

It was a tough regional battle with no compromises as both sides found the back of the net early, but it was Ashgold who would yet again win the battle to deny Kotoko the chance to record a double at the same venue, having beaten archrivals, Accra Hearts of Oak, last Sunday  in the semi-finals of the Tier One of the Special Competition.

The match was indeed costly for Kotoko as they did not only lose the opportunity to be in the final of another competition, but they lost their captain, Amos Frimpong, and goalkeeper Danlad Ibrahim to injury and the extent of injuries sustained by the two will be known today.

Just as they did at the same venue last Sunday, the Porcupine Warriors took an early lead through Naby Keita on the fifth minute, but they could not hold on for long, as Ashgold equalised almost immediately through a Yussif Mubari nod from a cornerkick well taken by Roland Amouzou.

Emmanuel Owusu (30th minute) and Mark Agyekum (55th min) also went on to score leaving Kotoko with no chance to recover and possibly push the game into penalties.

Having given themselves the needed confidence booster with the goal and equaliser, both sides tried to go ahead again, intensifying their probe but Kotoko, unfortunately, paid a heavy price in the 27th minute when inspirational skipper, Frimpong,  got injured and was replaced by Habib Mohammed.

That might have momentarily unsettled  Kotoko as three minutes later, Owusu put Ashgold ahead with a beautiful goal in the 30th minute when he connected Amouzou's cross.

Right from recess, the two sides continued from where they left off with each side determined to gain the advantage but it was  Ashgold who, again, had the upper hand when Agyekum soared to head home their third goal. Keen to stop the striker, Kotoko’s goalkeeper, Ibrahim, collided with the opponent and, unfortunately, got injured too.

This held the game up for about eight minutes. Coach Charles Kwablah Akonnor had to make a second substitution by bringing on reserve goalkeeper, Osei Kwame.

The Porcupine Warriors tried hard to recover, however, they were kept in check by a disciplined Ashgold defence. Not even the brilliant exploits of Abdul Fatawu Safiu could scare the determined Miners.

For instance, right from recess in the 48th minute, he powerfully headed the ball from close range, but was saved by the Miners goalkeeper.

There were other moves from Kotoko, however, a resilient Ashantigold side held on to possession and maintained their two-goal lead, with substitute Godfred Asiamah terrorising Kotoko in most parts of the second half.

As the game wore on, it was obvious Ashgold were the superior side and moments after the final whistle went, the Miners could not help but also taunt the Porcupine Warriors with the ‘Omo adaa’ dance just as they did to Hearts last Sunday.

The crestfallen look on the face of Coach Akonnor after the game obviously showed his disappointment as he and his charges were left to rue missed scoring chances for a special double.

Now, they [Kotoko] will have to recover quickly to face KarelaFC in the final of the Tier One tournament on Sunday for the Champions League slot.