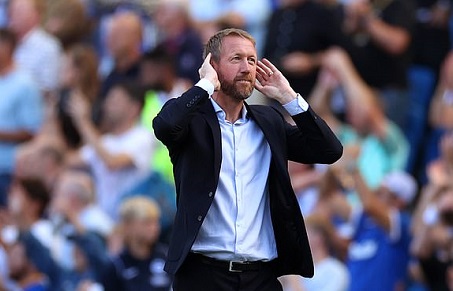 The Stamford Bridge club have been granted permission by Brighton to formally discuss the vacancy with Potter.

Sportsmail has been told that Potter is Chelsea’s No 1 target to replace Tuchel, who was sacked this morning.

Should Chelsea’s talks with Potter go according to plan, the expectancy is that the current Seagulls boss will be offered the job as new Chelsea head coach.

Sources have indicated that Potter is fully open to taking over at Stamford Bridge and that reaching an agreement for him to join Chelsea will be straightforward.

Indeed, unless there is a breakdown, Potter could be in position by the weekend when Chelsea take on Fulham.

Potter is understood to have a release clause - of at least £12million - in his contract meaning Brighton are powerless to prevent their manager from leaving.

Sportsmail understands the clause includes the release of the majority of Potter’s staff at the Amex.

Potter is settled at Brighton, who have started the season excellently.

However, sources have indicated to Sportsmail that Potter would give serious consideration to leaving the Seagulls for a club competing in the Champions League.

If Chelsea’s move for Potter fails to materialise then Mauricio Pochettino is also viewed as a strong candidate.