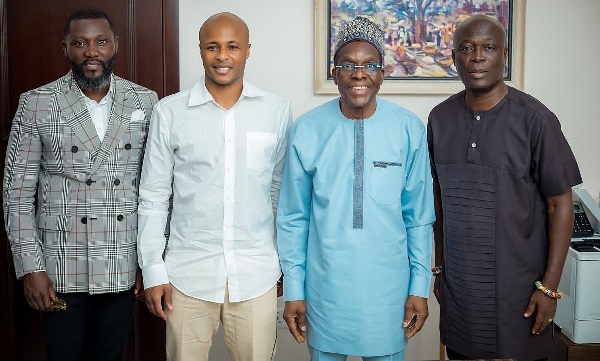 Black Stars skipper Andre Ayew has appeared before Parliament’s Select Committee on Youth and Sports to answer questions over the national team’s disastrous showing at the 2021 Africa Cup of Nations (AFCON) in Cameroun.

Months ago, the Parliament’s Select Committee on Youth and Sports began an inquest into the Stars’ poor campaign at the AFCON and demanded that skipper Ayew appeared to answer questions of their poor outing.

However, the Al Sadd winger’s busy schedules and commitments at club level made it difficult for him to honour their invitation but Ayew finally met with the committee on Thursday.

After answering questions from the individual members of the committee, the 31-year-old presented them with a signed jersey.

Ayew captained the Stars to one of their worst ever showings at the continental stage, where they failed to win a single group game.

Coach Milovan Rajevac’s side endured a disappointing run in the tournament in Cameroun, culminating in a humiliating 3-2 defeat to Comoros in their final group game.

That result against Comoros saw Ghana finish at the bottom of Group C after losing to Morocco and drawing with Gabon.

Coach Rajevac was subsequently fired as coach and has since been replaced by Otto Addo, who guided the team to qualify for the Qatar 2022 World Cup.