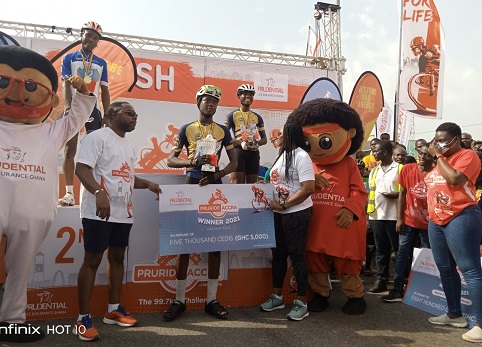 The residents of Anyaa-Sowutuom and Ablekuma in the Greater Accra Region witnessed a rare spectacle as the nation’s best cyclists converged there to compete in a memorable 99.7km road race last Sunday, December 5.

The second edition of the urban cycling competition dubbed: ‘PruRide’, is the brainchild of Prudential Life Insurance Ghana. The inaugural competition took place two years ago but was paused last year due to the COVID-19 pandemic.

According to the organisers, aside staging the exciting event to promote a healthy lifestyle and highlighting cycling as a sport, urban cycling was geared towards raising funds for the National Cardiothoracic Centre at the Korle Bu Teaching Hospital.

While the men compete for the coveted GH¢10,000 prize, the women will cover a shorter distance of 64km for the same cash reward, alongside a two-night stay at the Lou Moon Resort for the first prize winners.

That is not all. The mouth-watering package for the day has been spread across to the first 10 finalists. In view of that, the second prize winners in each division will take home GH¢5,000; the third place winners will get GH¢2,500 each, while the fourth to 10th finishers will go home with GH¢500 each. As if that is not enough, a token of GH¢1,000 will be added to the prize money of the top cyclists in the women’s professional category as a form of motivation.

Side-attraction
A side attraction will be a 64km men’s amateur race and a 38.4km for women, with the winners going home with GH¢3000 and GH¢2000 for the first runner-up and GH¢1000 for the second runner-up. The fourth to 10th cyclists will take home GH¢300 each. Just like the professional race, an additional GH¢800 will be added to the female winner’s cash prize.

The chief organiser, Mr Kojo Soboh, Executive Director of Carbon AV, disclosed that the needed arrangements had been made to ensure that none of the cyclists was left in the elaborate criterion that was expected to see winners fly to the United Kingdom to compete in the annual Ride London event. To underline its commitment, Prudential Life Insurance Ghana rewarded the maiden winner of ‘PruRide’, Frank Akuffo, and amateur race winner, Alexander Allotey, with GH¢15,474 each, despite not travelling to London to compete in the Ride London because of the pandemic.

Tomorrow’s event will be under the supervision of the technical director of the Ghana Cycling Federation (GCF), Mohammed Shabban, with oldies, families and corporate cycling enthusiasts being expected to participate in what is expected to be an interesting criterion.
Mr Shabban Mohammed, Technical Director of the Ghana Cycling Federation, said: “We are excited when corporate institutions actively invest in the less popular sports. We recognise Prudential’s consistency in promoting cycling and we are happy to be part of this year’s edition”.


GCF endorsement
By way of endorsement, the GCF has voted GH¢1000 to be given to any individual, male or female above 50 years, who wins that category.
A further financial package of GH¢1,000, plus a two-night stay at Lou Moon Resort  has also been earmarked by the organisers for families and cycling enthusiasts who emerge tops in the 12.8km road race.

PruRide 2021 has been designed to make an indelible mark on the minds of fans and admirers alike, while sparking off a cycling revolution in the country.
Even more remarkable for Sunday’s event is the revelation that the route for the competition will be same for the upcoming 2023 African Games to be hosted by Ghana.


Cycling legend
Sensational cyclist, Samuel Anim, blazed the trail and dazzled everyone on the two wheels much to the admiration of all till his unfortunate demise a few years ago. In fact, Anim’s death in 2015 through a motor crash, came as a shock to all.
While training on the mountains in the Eastern Region, the young enterprising rider who took the famous Cowbell Cycling Tour and other national cycling events by storm, was hit by a motorbike. Indeed, Anima’s death almost signalled the end of the sport in the country. Needless to say, like all least-financed sporting disciplines, he was never accorded a respectable burial.
As vengeance would have it, the sport was never the same again after his demise, despite various efforts to organise competitions and here and there. Big sponsor, Promasidor Ghana Limited, producers of Cowbell, eventually withdrew their sponsorship.


Government support needed
To worsen the situation, successive governments paid lip-service to the sport and the GCF sadly lacked the basic equipment to mount a road race on its own without sponsorship. This is where Prudential Life Insurance Ghana has come in handy to find remedy to a dying sport. However, one could still foreshadow Prudential’s venture as a nine-day wonder.
And for a yearly competition, that may barely be sufficient for a sport held monthly elsewhere in Europe, America and Asia.
Prudential may up their ante, if it garners the needed public support and mileage backed by the government’s involvement via the Sports Ministry.
It is the fervent hope that tomorrow may be the turning point for the revival of a dying sport that has more to offer the unemployed youth in the country than an international organisation such as Prudential Plc.