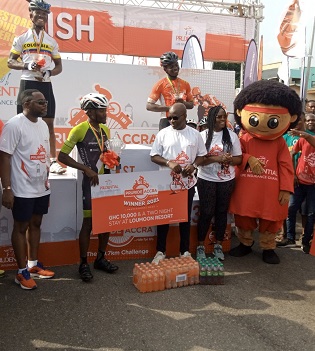 A TWENTY-EIGHT-YEAR-OLD professional cyclist from Quick Step Cycling Club, Abdul Rahman, beat over 150 contenders to emerge winner of the second edition of the Prudential Life Insurance cycling race at Ablekuma curve in Accra yesterday.
It was dubbed PruRide Cycling.

Rahman got all the vantage points in the eight-lap criterium in a time of 2:40.24secs to win a trophy, medal, GH¢10,000, products from Lucozade and the right to represent Ghana at the PruRide London in August next year.
He will be joined in London by the first runner-up, Victor Cudjoe, who arrived at the finishing line in a time of 2 hours 43 minutes and took home GH¢3000 and products from energy drink from Lucozade.

Third-placed Prince Kudiefiah finished in a time of 2 hours and 44 minutes to go home with GH¢2500 and products from Lucozade.

Women’s winner
In the women's professional category, Debbie Alasi came first and received a trophy, products from Lucozade and GH¢1000.
More than 150 participants took part in the event, including amateurs and oldies above 50.

While cyclists from the fourth to the 10th position were also rewarded in all categories, 52-year-old Kensima Adade earned GH¢800 as the oldest female participant, while 60-year-old  Fenty Curly took home GH¢1000 for being the oldest man to participate in the competition.

Amateur category
In the amateur category, Julien Fiasi emerged tops and took home GH¢5000, a trophy and a medal.
Elayah Serif came second and received GH¢2000, while Philip Baffour placed third and got GH¢1000, a medal and products from Lucozade.
Each participant in the race also went home with a consolation prize of GH¢300.

The Head of Corporate Affairs and Communications of Prudential Life Insurance, Maukeni Ribeiro, told the Daily Graphic that his outfit was geared towards creating a meaningful life out of Ghanaians.

He revealed that the event was used to help make Ghanaians healthy and active and raise funds for the National Cardiothoracic Centre at Korle Bu.
He called on Ghanaians to take their health seriously and patronise Prudential Life Insurance products for the betterment of their lives and a great future.