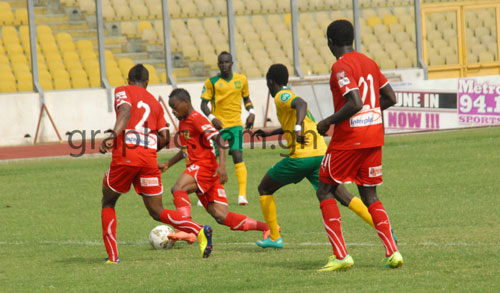 After last week’s abysmal showing in the CAF Champions League, Kumasi Asante Kotoko returned to winning ways and brought back smiles to the faces of their supporters with a 2-1 win over Ebusua Dwarfs in a Glo Premier League match at the Baba Yara Stadium Sunday.

The players, who were subjected to boos and jeers after their elimination from the continental competition by  JSM Bejaia of Algeria in Kumasi, were this time hailed by the sparse crowd which turned up to watch them snatch an injury time winner against Dwarfs.

Kotoko’s strong defender Kwabena Adusei fetched the all-important goal in stoppage time after a resilient Ebusua Dwarfs had done everything in an attempt to deny them victory.

Hard-working midfielder Michael Akuffo, who effected a free kick near the Dwarfs area,  placed the ball for a well-positioned Adusei, who wasted no time by shooting past keeper Patrick Antwi.

The stadium that had gone virtually dead came to life and when the game ended it was all praises for the team.

The early exchanges saw Dwarfs holding sway, and as they punched holes in the Kotoko team with swift attacking play, indications were that the visitors would deepen the woes of Kotoko.

And when Bright Lukeman fired his side up in the 19th minute, fears were even heightened.

The masterstroke that could break the Dwarfs defence was not forthcoming and Kotoko continued to chase their shadows until Abdul Yusif Aziz levelled up in the 36th minute.

The striker, who had remained quiet, suddenly exploded, and cut through the Dwarfs defence to plant the ball beyond the reach of the keeper.

A huge relief it was but that could not propel Kotoko to increase the scoreline before the break.

Kotoko, who featured former Dwarfs players, Rashid Sumaila who had an excellent game, and Seidu Bancey, were a hugely  transformed side on restart and in the 55th minute Michael Akuffo rocked the goal post with a cracking freekick.

When the game appeared heading for a 1-1 draw, Adusei struck superbly to clinch victory for Kotoko.